The cyclone that hit south eastern Africa last weekend was unprecedented. It came across the coast with winds gusting up to 250 kilometres an hour and dumped a 1000 millimetres of rain on central Mozambique and the Eastern Highlands of Zimbabwe. 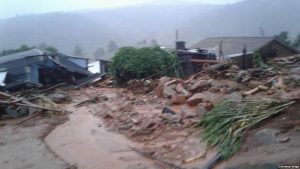 Associated with this was a sea surge that hit the low lying coastal areas with a ferocity we have not experienced before. Behaving a bit like a Tsunami – up to 6 metres in height on top of the normal high tide.

The result: a wave of water from the sea that smashed its way inland and crushed fuel tanks like empty coke cans. 90 per cent of the homes in the City of Beira – home to 500 000 people, were damaged. The cyclone moved swiftly inland at 10 kms an hour and then hovered over the mountains that form the border between Mozambique and Zimbabwe. There it sat dumping 25 mls an hour on average on a vast area of mountain and forest. The result, no longer had the people along the coast started to recover from the impact of the sea surge, but the flood waters from the interior arrived, rivers overflowed their banks and thousands of square kilometres were swamped.

Two main rivers were affected – the Save and the Pungwe. The former seldom floods like this – it is normally a placid stream between high banks and largely open sand. The latter floods every year and covers a wide swathe of land on the vast coastal plains behind the Port of Beira. Because of this the rail and road systems that feed Beira and form the main arteries of trade are built up high above the flood plain – the railway line on hard rock brought in from Zimbabwe by the Engineers that built the line at the turn of the 20th Century.

This year the huge deluge caused by the cyclone brought down floods on a massive scale and the areas inundated by the rivers bursting their banks covered huge areas. On the Save a lake formed that is over 125 kilometres long and 40 kilometres wide. Everything thing in its path was drowned. A visitor who was forced to walk 25 kilometres to safety – talks of hundreds of bodies on exposed mud banks and floating down the swollen rivers.

In Zimbabwe, every District south of the City of Mutare experienced rainfall from 600 mls to 1 200 mls over two days. Every bridge was destroyed, roads washed away and buildings destroyed – people washed away by the flood were carried many kilometres downstream until they drowned, were taken by crocodiles or found refuge in trees. Many were washed 200 kilometres into Mozambique and may never be found. It was the worst weather related disaster in African history and I think the final death toll will never be known, but it will run to thousands.

Here in Zimbabwe our Government was slow off the mark, not appreciating the extent of the problem or its severity. But within 24 hours the Minister of Finance released $50 million to the relief agencies and the army was deployed with helicopters. But it was the Church where the reaction was more immediate and massive. Calls came in from the affected areas telling of the scale of the disaster and the needs. The community started mobilising and the reaction by ordinary people and business was overwhelming.

At the Presbyterian Church in Highlands in Harare, the police came in to help manage the traffic, a queue developed of cars and trucks delivering everything from food and water to clothes and blankets. Volunteers started driving to the affected areas and in such numbers that there was concern that they might become a burden on the relief agencies. In three days over 1000 tonnes of assistance was sent up to the area in 30 tonne trucks from that Church. The same story was repeated in every town and city across the country. Doctors volunteered and an appeal went out for a mobile operating theatre – it was manufactured overnight and two units were sent up on a flat bed with all services built in, the following day.

Remember this response was in the midst of a period of our history where incomes are being severely constrained by an economic crisis caused by the need to clean up our act after the coup that got rid of Mr. Mugabe in November 2017. Our people are struggling with high inflation and a decline in disposable incomes. We are also experiencing a severe drought with water shortages and crop failures looming in most of the country. The effect of the cyclone hardly reached the Capital and left the rest of the country under dry hot conditions. The Community response represents real sacrificial giving by our people.

Perhaps this is another sign, if we needed one, that climate change is a reality. We were warned – areas of the world would be drier, others experience more rainfall, severe weather incidents would be more frequent. Just look at the news every day, is this not the new reality? It means Mr. Trump, that this is not just our problem but it is everybody’s problem and it requires the kind of consensual, national response that we have seen in this small country in the past ten days.

No country is an island, no country can “go it alone”. For issues like this we need a global response and on a scale not seen before in history. It’s not time to hesitate or postulate false dispositions about the science or the facts. It is time for action.

We know what the problem is and its mainly in the rich communities of the North who enjoy a consumptive standard of living that humanity could not have imagined 200 years ago. But it means we are living beyond the capacity of our world and its limited resources can sustain. Do we tell the rest of humanity “tough luck”, that you live in a tough place, we are OK! And please do not toss a few coins in the collection plate at “Donor Conferences” or in response to appeals for help in a crisis like ours that will soon be forgotten. We need real action and time is running out.

We need a global energy strategy, we need to accelerate research into alternative, low carbon technologies, we need to hasten the demise the internal combustion engine, we need to plant trees and curb the growth of deserts. We need to live more simply and to act in our own spheres of influence by doing the things we all can do to halt our headlong rush to destruction. The Bible calls for Mankind to take responsibility for this small planet hung in space by a creator God. It is everybody’s responsibility. We need to address the underlying problems – not put salve on the outcomes of our delinquency.

But until that time it is up to all of us to love our neighbours in whatever way is needed. In this respect I am so proud of our Community here, the way they responded to the needs of others. If we work together there is nothing we cannot achieve and no obstacles we cannot overcome.