Two survivors of cyclone Idai died and 11 were hurt when the brakes failed on an army truck delivering food aid in eastern Zimbabwe and it ploughed into a waiting crowd, an official said on Friday. 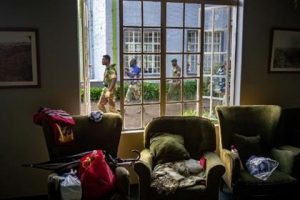 Soldiers are seen through a lounge window as they leave the Chimanimani Hotel where a hundred of affected residents, mostly women and children, are sheltered in Chimanimani. (Zinyange Auntony, AFP)

Defence forces provincial spokesperson Major Exavier Chibasa told AFP the accident happened at Skyline in the district of cyclone-ravaged Chimanimani on Thursday where victims of the cyclone were gathering to receive aid.

“The vehicle lost brakes while travelling on a steep gradient. There were people sitting on the sides of the road,” Chibasa said.

“Unfortunately two of them fell victim and lost their lives. About 11 others were injured but not seriously.”

Some two million people’s lives have been touched by cyclone Idai, which hit Mozambique before moving inland to Zimbabwe and Malawi.

The army is helping with the transporting and handing out food and other relief aid donated to victims of Cyclone Idai.

The storm affected at least 270 000 and claimed 185 lives in landlocked Zimbabwe while more than 200 are missing. The UN migration agency IOM however put the Zimbabwe death toll at 259.

In neighbouring Mozambique at least 493 people died and 1.85 million were affected.

The heavy downpour which led to floods and landslides damaged hundreds of homes, roads and bridges in the Chimanimani and Chipinge districts.

One school lost 30 pupils and several staff members while a local church lost a quarter of its congregation to the cyclone.