Zimbabwe is often in the news for the wrong reasons. For a long time it was the autocratic leader Robert Mugabe who made sure of that. 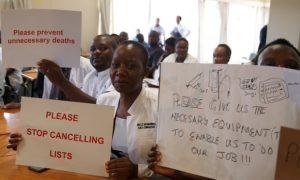 Zimbabwe is often in the news for the wrong reasons. For a long time it was the autocratic leader Robert Mugabe who made sure of that.

When he was not beating and torturing citizens or killing opposition politicians and stealing elections, he was unleashing youth militia on farms or deploying intelligence operatives on perceived government critics.

At the same time, with equal force and determination, he was ruining the country’s economy, culminating, in 2008, in the highest inflation in the world. A lot has been written or said about Mugabe politics and that of his protégé and successor, President Emmerson Mnangagwa, but less is said about the human cost of their failed economic policies. For instance, the impact of the economic crisis on maternal mortality is shocking. For a country not at war, far too many women are dying during childbirth in Zimbabwe.

The case of *Siphiwe Moyo helps to illustrate fully how devastating the current economic crisis is to ordinary Zimbabweans, and especially women. Siphiwe was admitted into the public maternity hospital in the second largest city, Bulawayo, over a month ago. She expected to deliver twins and throughout her pregnancy had no complications. Because she was expecting a double birth, she elected to deliver the twins via caesarean section – normally a relatively simple surgical procedure with limited risk. But she would need to navigate her way through a collapsed health system.

The health system has borne the brunt of the economic crisis in Zimbabwe.Doctors and nurses earn meagre wages – an equivalent of US$400 and US$200 per month respectively; hospitals have dysfunctional or no equipment; medicines, including simple painkillers, bandages and other essential medical supplies are unavailable. A patient must generally bring everything they will need to be treated for the doctors to be in a position to help them.

Even in the case of an emergency or life-saving surgery, often nothing can be done until the patient’s family arranges to secure everything that is needed privately. Drips, bandages, anaesthetic, antibiotics, surgical equipment…everything. The only thing the hospital will provide – and that is if one is lucky – is the medical personnel, and even then they are overwhelmed have downed tools several times in protest at their working conditions.

So Siphiwe made sure to bring everything she needed for her caesarean section. When the time came, the procedure itself was simple and straightforward with two healthy babies delivered.

After delivering, she was moved to the maternity recovery room. The maternity recovery room is one of the worst medico-legal hazards that can be found in any hospital. It hasn’t got a single monitor or any resuscitation equipment. Several  hours after her surgical procedure,  Siphiwe experienced severe chest pains followed by desperate gasping. Minutes later she was dead.

The cause was pulmonary embolism – a stroke due to a blood clot that had travelled to the lungs. Whilst pulmonary embolism is unpredictable,  it can easily be managed, especially inside a hospital. Post-operative procedures can anticipate and reduce fatalities. It turns out that Siphiwe needed to be admitted to the intensive care unit across the road from the maternity ward but there was no ambulance to take her. There were also no beds in ICU, no equipment, no medicines, particularly heparin or clexane which is used to thin the blood – she would have needed to bring her own.

There was no equipment for emergency life-saving surgery to place a net that would catch clots and prevent them from reaching the lungs, which is what causes the embolism. A needless, unnecessary and avoidable death inside a major hospital in an urban centre and not in some far flung rural village – although there are many of those too.

The tragic case of Siphiwe and her now orphaned twins is illustrative of just how bad things have become for ordinary Zimbabweans. Essentially a matter of life and death. Even with a great deal of self-help and mitigatory efforts by citizens, hospitals have become death traps.

Besides the measly wages, medical staff work under the worst conditions imaginable. They are overworked and under-appreciated by a government that prioritises luxury cars for government ministers, multiple overseas trips for the President in hired luxury jets, large expenditure on political rallies and paying hundreds of thousands of dollars to lobbyists in the United States.

So what now? Can the deaths of other women like Siphiwe – for there will be others – be prevented? Most certainly. If the government can prioritise investing in the health sector instead of spending every penny it comes across on senior public servants’ perks and the military there is no reason to not see immediate improvements.

In a clear indication of lack of political will, even the increased revenue from a new 2% tax on all electronic transactions has not found its way to the health sector. Corruption also remains a huge obstacle and drain on the fiscus with a lot of talk but no walk by the government.

As the government maintains its faux drive to secure external investments and open credit lines with the IMF under its misplaced “austerity for posterity” policy, the fear is that the preoccupation with both will lead to increased corruption, with further deterioration of the health and other key social sectors. Unless a radically different, pro-people approach is taken, we are likely to see more preventable deaths of women like Siphiwe.

*The real name has been changed to protect the identity of the person.