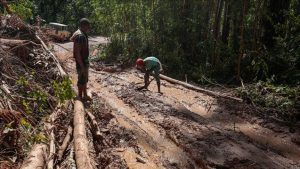 HARARE, Zimbabwe – At least 20,000 refugees in Zimbabwe were affected by the deadly Tropical Cyclone Idai, UN officials said on Sunday.

Country representative for the UN High Commission for Refugees (UNHCR) Robert Tibagwa spoke in the capital Harare, during the handover of 80 metric tons of goods donated to the Zimbabwean government.

“We have at least 20,000 refugees and asylum seekers at Tongogara Refugee camp near the Mozambique border who were affected, of which 5,300 were severely affected because 1,060 houses were damaged,” Tibagwa said.

Near the mutual border with Mozambique, Tongogara Refugee Camp is on the outskirts of the town of Chipinge, which was severely ravaged by the tropical depression, leaving a trail of destruction.

Asylum seekers and refugees from Mozambique, Rwanda, the Democratic Republic of Congo and Somalia are housed at Tongogara Camp.

Tibagwa added that water and sanitation infrastructure had been destroyed, with latrines being flooded and boreholes being filled, resulting in a contamination the drinking water supply.

It is estimated that 90,000 people were displaced in nine districts mainly in the eastern parts of the country, with more than 200 dead and some 300 missing and an overall 250,000 people affected.

The UNHCR is part of the humanitarian team working closely with Zimbabwe’s government to ensure people receive aid and protection from various risks and dangers.