Elements of corruption’ is a gross understatement but it was nevertheless a welcome breath of reality from President Mnangagwa in his ZBC television interview on the eve of Independence Day. 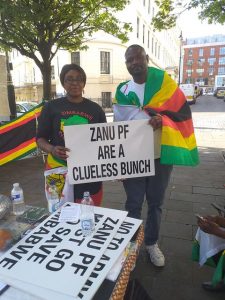 Mnangagwa came to power promising to root out corruption but now says he didn’t realize the extent of the problem until he tookc office and admitted that he had not been able to fulfil his promise.

Mnangagwa added that there were some individuals in the judiciary and police who were doing their best to nip the problem in the bud. But the Vigil believes the bud is Zanu PF itself.

Mnangagwa talks of ‘corrupt elements’ but he seized power nearly a year and a half ago and can’t now shrug his shoulders and say things are out of his control. The truth is that  he leads what Dr Pedzisai Ruhanya of Crisis in Zimbabwe Coalition describes as a ‘predatory, corrupt, parasitic, authoritarian and militarised elite that has privatised the struggle for personal greed’ (see: https://zwnews.com/gloomy-independence-for-zimas-hyperinflation-returns/).

The message of Easter is to face the truth. Until those in charge face this challenge the future of Zimbabwe will be bleak.

FOR THE RECORD: 7 signed the register. A small attendance today because of the MDC UK and Ireland national conference in Leeds.