HARARE (Xinhua) -- Infrastructural development has become the cornerstone of China-Zimbabwe cooperation with the Asian giant investing billions of U.S. dollars in infrastructural projects in various sectors of the Zimbabwean economy. 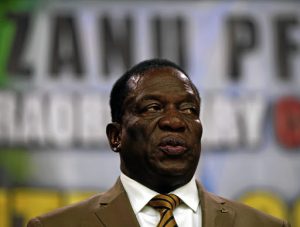 Human development has not been left out either, with the Chinese government building schools and a hospital in the country and sinking boreholes in drought prone areas, while construction of a new Parliament building is taking shape in northwest of Harare.

The Chinese government provided a grant of 673.43 million yuan (about 97 million U.S. dollars) for the building which will allow the growing legislative assembly to convene in a more comfortable environment.

The giant National Sports Stadium nestled in west of the city is an emblem of cordial China-Zimbabwe relations and could host international games with the largest being the 6th All Africa Games in 1995.

With many on-going projects and others still on the cards, China has become the largest injector of foreign direct investment (FDI) into Zimbabwe since Zimbabwe adopted its “Look East Policy” in 2003.

The policy followed the imposition of economic sanctions on the country by western nations after the country engaged in contentious land reforms which stripped some white farmers of their land rights in favor of formerly landless blacks.

The “Look East Policy” has mainly targeted China, with Chinese investments in the country rising remarkably from 2009 to 2013, making Zimbabwe one of Africa’s largest recipients of Chinese FDI.

The tempo on infrastructural development cooperation between the two countries has been raised as the Chinese companies are involved in projects that advance the quality of lives of Zimbabweans.

Chinese company Sinohydro, with support from the Chinese government, in 2018 completed a power boost project at Kariba South Hydro Power Station where it installed two generators with a capacity of 150 megawatts each.

Work on the 550 million dollar project at Zimbabwe’s second largest power station began in 2014 and the first generator was commissioned in December 2017.

China EximBank contributed some 90 percent of the funding while the Zimbabwean government took up the remainder.

Sinohydro is also refurbishing the country’s largest power station – Hwange Thermal Power Station – to give it a boost of nearly 700 MW at a cost of 1.5 billion dollars.

Two more generators, each producing 335 MW, will be installed at the plant to give it a capacity of 1,590 MW.

The same company also in early 2017 expressed interest in helping Harare City Council upgrade its water and sewerage systems and also wanted to invest in the rehabilitation and upgrading of the city’s roads.

The council said recently that Sinohydro will build four sewage treatment plants and upgrade other existing ones under a 237 million dollar partnership.

In addition, China Jiangsu International completed the upgrading of the Victoria Falls International Airport in November, 2016, under a 150-million-dollar loan from China Eximbank.

The airport, which prior to the upgrade accommodated 500,000 passengers annually, now has the capacity to handle 1.5 million and can accommodate larger long haul aircraft like Boeing 747.

The upgrade will bring in new technologies and efficiency in the facilitation of passengers, aircraft and cargo.

Head of the Regional Economic Development Institute at the Southern Africa Research and Documentation Center (SARDC) Joseph Ngwawi told Xinhua in a previous interview that China had been one of the most significant investors in Zimbabwe in recent years.

In a move for green development, three Chinese companies struck multi-million-dollar deals for the building of solar power stations in Zimbabwe, further consolidating China’s growing influence in the local economy.

The power stations will be the first of their kind in Zimbabwe as the country had hitherto relied on thermal and hydro-power generation only.

Energy sources have lauded the deals saying that solar energy technology is not only cleaner but also renewable.

These projects – and many others which have not been mentioned – dovetail into the Belt and Road Initiative (BRI).

University of Zimbabwe Pro-Vice Chancellor Pedzisai Mashiri said at a recent convention to discuss the impact of the initiative on Zimbabwe that it provided equal and inclusive opportunities for Africa.

He said transport infrastructure projects such as upgrading of airports in Zimbabwe by China would help the recovery of Zimbabwe’s economy.

SARDC researcher Tanaka Chitsa said from an African perspective, the BRI was the way to go in terms of trade and development.

Zimbabwean President Emmerson Mnangagwa told Xinhua that the southern African country is committed to the BRI and does not want to be left behind.

“The Belt and Road Initiative is indeed a vision for the future,” Mnangagwa said. “Zimbabwe is one of those countries that has embraced it.”

Zimbabwe hopes to accelerate infrastructure construction and modernization on the basis of mutual benefits and win-win cooperation, the president said.