HARARE – The Government of Japan contributed US$350,000 to respond to emergency needs in Zimbabwe following Cyclone Idai. The contribution, provided to the World Food Programme, will support immediate food needs in the worst-affected areas of the country. 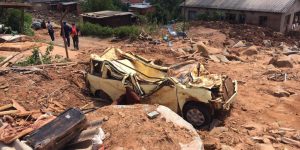 Some 270,000 people in seven districts of Zimbabwe have been affected by Cyclone Idai which made landfall in Zimbabwe on 15 March 2019. In the two worst-affected districts, Chimanimani and Chipinge, homes, crops and livestock were washed away or submerged in mud and water, severely disrupting livelihoods.

Many people affected by the cyclone were already considered food insecure, with some 5.3 million people in need of humanitarian aid nationwide from now through June, following economic instability and an erratic rainy season and long mid-season dry spells that severely impacted crops.

The Japanese funds will support the cyclone response by providing food assistance to some 26,200 affected people, meeting their immediate nutritional needs as they recover and rebuild. “This food assistance will complement the donation of emergency relief goods, including tents, water containers, water purifiers, plastic sheet tarpaulins and generators, that Japan provided in March,” said Ambassador of Japan, Toshiyuki Iwado. “We hope that this support will quickly help to meet the basic needs of the most affected.“

“We are thankful for the timely and continuous support of the Japanese people,” said WFP Zimbabwe Country Director Eddie Rowe. “The Government of Japan has been a constant partner in our shared efforts to improve the food security, nutrition, and resilience of communities affected by seasonal shocks,” he added. “With this new contribution we will provide life-saving assistance to the most vulnerable people in the most affected districts.”

In early 2019 the Government of Japan contributed US$500,000 to WFP’s resilience-building and nutrition activities, benefitting over 4,200 individuals in 28 districts across the country.

The United Nations World Food Programme – saving lives in emergencies and changing lives for millions through sustainable development. WFP works in more than 80 countries around the world, feeding people caught in conflict and disasters, and laying the foundations for a better future.