In response to the “follow-up” meeting between the Minister of International Relations and Cooperation Lindiwe Sisulu and the Minister of Police Bheki Cele with Heads of the Diplomatic Missions represented in South Africa “to find a lasting solution” to xenophobic attacks in the country, Shenilla Mohamed, Executive Director of Amnesty International South Africa, said: 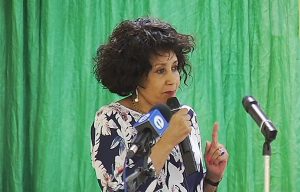 “Longstanding criminal justice failures and populist rhetoric are some of the reasons behind the latest round of xenophobic violence against refugees, migrants and asylum seekers in South Africa.

“For many years, South African authorities have largely failed to address past outbreaks of xenophobic crimes that have been seen in the country since at least 2008, including bringing those suspected to be responsible to justice.

“Political leaders must stop making discriminatory and inflammatory remarks about migrants and foreign nationals especially during their election campaigns ahead of the polls.

“Rather than making comments that risk fanning the flames of xenophobia, the authorities must act to counter stereotypes, eradicate discrimination and foster greater equality and social cohesion in South Africa.

“South African authorities must ensure effective protection for refugees, migrants and asylum seekers against xenophobic attacks. The government must take concrete steps to hold suspected perpetrators to account. That begins with tackling impunity for past xenophobia-related crimes.”