As Zimbabwe’s economic and political situation teeters on the verge of chaos, SA takes a disjointed approach. 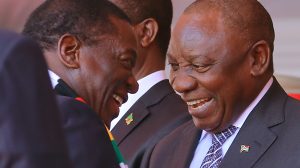 It is in South Africa’s interest to see a thriving and stable Zimbabwe. A collapse of its neighbour’s economy would probably see an influx of legal and illegal migrants into South Africa – a situation that could fuel xenophobia and further strain service delivery.

Yet there has been a bewildering contrast between South Africa’s messages of solidarity and its inactionwhere it matters. On the one hand, President Cyril Ramaphosa’s government has maintained its support for President Emmerson Mnangagwa’s administration. South Africa was the first to congratulate him on his electoral victory in August 2018. This has been followed by spirited calls for the unconditional lifting of sanctions and restrictive measures placed on Zimbabwe nearly two decades ago.

On the other hand, South Africa has come short of providing what Mnangagwa urgently needs: a financial bailout. The just-ended Zimbabwe-South Africa Bi-National Commission session – the third since the inaugural session in 2016 – might have put paid to the many rumours that South Africa would provide Zimbabwe with a much-needed cash injection. Instead, it ended with a joint communiqué that reads more like a political statement of solidarity with little in terms of relief for its cash-strapped neighbour.

Established during the tenure of former presidents Robert Mugabe and Jacob Zuma, the commission has been little more than an annual symbolic gesture of friendship between the two. Ramaphosa’s team sent ahead of the Bi-National Commission engaged in robust meetings with key players in the private and public sectors presumably to try to establish how South Africa could help its beleaguered neighbour.

While the decision to not bail Zimbabwe out is probably based on practical economic calculations, the anti-sanctions rhetoric is a different matter. A cursory view of the anti-sanctions call might lead one to the conclusion that lifting sanctions would grant Zimbabwe access to lines of credit from the international market and thereby ameliorate its currency crisis.

However, considerations for South Africa are as much political as they are economic. Sanctions imposed on Zimbabwe by Western countries relate to the blatant human rights abuses of the Mugabe regime. South Africa’s anti-sanctions position could also be interpreted as a general stance – shared by the wider Southern African Development Corporation (SADC) region – against sanctions in general.

The ‘sanctions must fall’ mantra should be seen as a distraction from the economic mismanagement of the past three decades. Even Mnangagwa has said the ZANU-PF government shouldn’t use sanctions as an excuse for the country’s economic woes.

So why has South Africa taken up the ‘sanctions must fall’ mantra while staying silent on the human rights abuses, killing of protesters and a heavy-handed clampdown on civic space during the January fuel hike protests?

South Africa is wary of being perceived as aligning with the West, especially the United States (US). The US government has been vocal and forthright against the Mnangagwa regime’s use of force against protesters to the extent of renewing sanctions for another year.

Offering the Zimbabwe government unqualified support becomes an opportunity for South Africa to demonstrate its international foreign policy independence and to shore up against “invasive” Western neo-colonial tendencies.

At the same time, well aware of the depth of Zimbabwe’s economic and currency crises, South Africa knows that giving bilateral aid of $1.2-billion wouldn’t necessarily stabilise its neighbour’s economy. Without addressing the enduring currency crisis, any bailout would be sucked into an economic black hole just to have Zimbabwe requiring more. The shortage of hard currency only begets more shortages.

The Zimbabwean government needs foreign currency for consumer goods, including for the procurement of fuel and wheat, as well as to service debt, which the finance minister estimates to be around $16bn.

The recently introduced interbank foreign currency trading system has so far not been able to address the foreign currency shortage. The real-time gross settlement (RTGS) dollar continues a steady depreciation against the US dollar from the 1:2.5 at its introduction to 1:3 in six weeks.

Worse, the floating of the RTGS dollar has not engendered confidence in the monetary system. On the black market, the RTGS dollar continues to plummet weekly and inflation is on the rise. Prices of basic commodities such as bread have risen steeply. There is still no guarantee against arbitrage and policy somersaulting from the cornered government.

Further, a bailout would put South Africa in an invidious position. South Africa is itself in the throes of economic stagnation emerging from sluggish growth of 0.8% in 2018. The country’s unemployment rate is currently hovering above 25% – one of the highest in the world.

The recent worsening of power cuts only plays into an already volatile domestic situation. Any talk of bailing Zimbabwe out would probably elicit a backlash from the restive population already prone to xenophobic tendencies towards citizens from neighbouring states. The African National Congress can ill afford to antagonise citizens any more in an election year.

Strong parallels can be drawn with the situation in South America where South Africa has been supporting Nicolás Maduro Moros’s government in Venezuela against the machinations of the US’s Donald Trump administration.

While the matter forming the basis of the Zimbabwe crisis is different from Venezuela, the geopolitical script plays out in the same way. South Africa is choosing the course of solidarity with the “besieged”.

As Zimbabwe’s economic and political situation continues to teeter on the verge of chaos its southern neighbour seems to be taking a considered approach to the crisis. The dilemma for SA is that without a cash infusion, the economic crisis will worsen, and a worsening economic situation will probably result in more protest and civil unrest. The Mnangagwa administration has already shown itself only too eager to approach protest with force and brutality.

This pushes South Africa further into an unenviable choice between principle, as enshrined in its Constitution, and the realities of geopolitics. It remains to be seen for how long South Africa will give Zimbabwe a palliative response before the wheels come off. DM