Roads and bridges are being repaired in a dash to reach cyclone survivors. 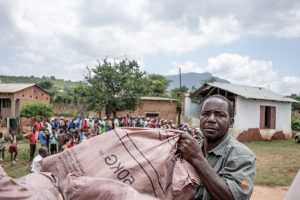 A police officer unloading a truck of donated supplies from Mutare at the weekend. As the government and international community have struggled to respond, ordinary Zimbabweans have stepped in to help.Roads are being cleared and bridges repaired as the relief effort gets into gear in Zimbabwe to reach the survivors of Cyclone Idai, but some areas are still inaccessible more than two-weeks after the devastating storm struck the east of the country.

In the hardest hit areas of the Manicaland districts of Chimanimani and Chipinge, 95 percent of infrastructure – including schools, roads, and bridges – has reportedly been damaged. Aid is slowly getting through, though, as the slideshow below documents.

In the latest government estimates released on Tuesday, the death toll from the 170-kilometer winds and flooding rose to 268 people, with 300 still missing and 90,000 people displaced.

In total, 270,000 people were affected by the cyclone — the worst in the country’s history — which made landfall in Mozambique on 14 March before tearing into Zimbabwe and neighbouring Malawi.

Information Minister Monica Mutsvangwa said access to affected areas has steadily improved as more roads are opened. “However, government is concerned with a shortage of aircraft to airlift the relief assistance to collection points still inaccessible by road,” she told journalists after a cabinet briefing.

The Chimanimani civil protection unit chairman, Lloyd Kasima, said vulnerable people — including the elderly and children — were still at risk in the hard-to-reach areas.

“The main challenge we are facing is transporting food to the affected wards,” he said. “We have mainly been using helicopters to ferry aid, but they don’t carry a lot. Government and some partners are working round the clock to clear new roads, repair bridges to connect to the people, and to ferry more aid.”

More than 13 roads and bridges are expected to be reconstructed and repaired at an estimated cost of $20 million, according to the Manicaland provincial administrator, Edgars Seenza. The government has so far released $100 million to help with the relief effort.

Over the next three months, the World Food Programme plans to reach up to 270,000 affected people with food and nutrition assistance. And the United Nations in Zimbabwe has appealed for $62 million to help rebuild homes, schools, and health facilities destroyed by Idai.

The call for aid funding follows an outpouring of local charity from individuals, churches, and the private sector, donating food, clothing, medicine, and money to help the survivors. Such efforts include the food delivery to a community in the Chimanimani Mountains, documented in the images below. Local volunteers from the town of Mutare, more than 140 kilometers away, organized the delivery.