Zimbabwe’s currency reforms have not gone far enough and complete liberalization is needed to end a critical shortage of foreign exchange that is hampering business, senior executives from the nation’s mining industry said. 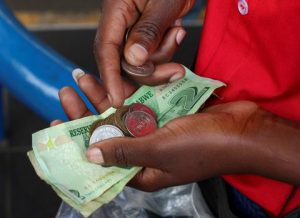 The southern African country began formal trading in February of what’s effectively a new currency, known as RTGS dollars, through a newly created interbank market. While it abolished a 1:1 peg between the U.S. dollar and the RTGS$’s predecessor, so-called bond notes and their electronic equivalent, trading has been thin and the difference between the interbank rate and the black market remains wide.

“The rate must be allowed to float,” Bhekinkosi Nkomo, the chief executive officer of RioZim Ltd., a gold and nickel producer, said at a conference in Johannesburg on Wednesday. “If it’s not working, try something different.”

It’s one of the flagship policies of Finance Minister Mthuli Ncube and what he says is an initial step toward the reintroduction of a fully fledged currency that could be traded abroad. The country abandoned the Zimbabwe dollar in 2009 after inflation surged to 500 billion percent, rendering it worthless. It then allowed the use of various currencies including the U.S. dollar and in 2016 introduced bond notes, which rapidly started trading at a discount on the black market.

The RTGS$ traded at a record low of 3.1383 to the U.S. dollar on the interbank market Wednesday, according to the country’s central bank. The black-market rate was 4.36, figures on the website of marketwatch.co.zw, a site run by financial analysts, show.

“It’s too early to say it’s a failure,” Batirai Manhando, president of the Chamber of Mines of Zimbabwe, said in an interview, adding that ultimately trading should be liberalized to allow an effective allocation of the currency available. “It’s a positive step. 1:1 was daylight robbery.”

Ncube, who was appointed by President Emmerson Mnangagwa last year, has been tasked with reviving an economy close to collapse as a result of the policies of former leader Robert Mugabe, who was ousted in 2017.

“The market is already liberalized but these are early days,” said George Guvamatanga, permanent secretary in the finance ministry said in response to questions. “The monetary authorities will continue to fine tune the market micro framework and this will result in more liquidity.”

Still, further reforms are expected to be slow.

“It’s like opening a pressurized can, you need to do it slowly,” RioZim’s Nkomo said.