Today we feature an extract written by Sharon Pincott, from the recently released landmark coffee table book titled The Last Elephants, compiled and edited by South Africa’s Don Pinnock and Colin Bell. This book consists of 42 chapters, each written by an expert who gave freely of their time, with stunning photos contributed by world-class photographers. 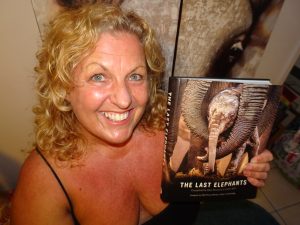 In its Foreword, HRH Prince William writes: “At the current pace of illegal poaching, when Charlotte turns 25 the African elephant could be gone from the wild… We cannot let this happen. I am not prepared to be part of a generation that lets these iconic species disappear and have to explain to our children why we lost this battle when we had the tools to win it.”

Of the book’s title, Don Pinnock and Colin Bell ponder: “Is this title prophetic? We don’t hope so. But the signs are worrying.” …“This book is a tribute to the many people who work for the welfare of elephants, especially those who risk their lives for wildlife each day: field rangers and the anti-poaching teams, in particular. It is an acknowledgement, also, of the many communities around Africa that have elected to work with elephants and not against them. The book is also a tribute to such researchers as Iain and Oria Douglas-Hamilton, Joyce Poole, Cynthia Moss, Daphne Sheldrick, Paula Kahumbu, Mike Chase, Kelly Landen, Michelle Henley, Sharon Pincott and many others – the Jane Goodalls and Diane Fosseys of the elephant world who have dedicated their lives to these great, graceful and engaging animals.”

Don Pinnock said in an interview: “Elephants are extremely intelligent, long-suffering and essentially gentle animals with family structures and allegiances similar to our own. Our bond is well expressed by one of the writers, Sharon Pincott, who spent many years with a single herd in Hwange, Zimbabwe.”

Below is an extract from Sharon Pincott’s chapter (Chapter 24 of The Last Elephants), titled Learning from Zimbabwe’s ‘presidential elephants’. Later in this chapter, Pincott warns that “uninformed message[s] – that all’s well and under control – [is] one of the very real dangers elephants face”. She also warns that “simply seeing lots of grey moving through the bush certainly doesn’t mean that all is well within each family”.

“Zimbabwe’s presidential elephants roam a relatively small slice of unfenced land in western Zimbabwe’s Hwange Estate, their huge footfalls etched daily in the Kalahari sand. I arrived in March of 2001 to work with them, a fearless young woman from Australia, eager to embark on a new life working alone, untrained, unpaid and self-funded.

The elephants were said to inhabit just one section of land and to be specially protected from hunting, culling and other ills by a 1990 presidential decree. Although the decree was probably well intentioned at the time, the realities on the ground were worrying.

Few elephants remained just on the Hwange Estate. Hwange National Park – some 100 times larger than the estate – beckoned, with a mere railway line separating these two areas. The elephants, I also discovered, didn’t belong to just one herd. Which were presidential elephants and which were not? They were all said to be presidential when (and perhaps only infrequently) they were within the estate’s boundaries. Research into population dynamics pointed to another anomaly. The 300+ elephants touted to be presidential could never have proliferated from a handful of ‘original’ estate elephants, as the public had been led to believe. Influx from the adjoining Hwange National Park was certain.

Various elephants were easily recognisable and, in my early years, did spend much of their time on the estate with their families. A few of these individuals were known by name to some resident safari guides. Most notable were two adult females, Inkosikasi and Skew Tusk, said to be two of the original presidential elephants. Yet I never encountered these two or any of their family members intermingling, so it was unlikely that they were related. Inkosikasi was a big, tuskless cow but, as I soon discovered, there were several such cows and all were mistakenly called Inkosikasi. When Skew Tusk broke her skewed tusk, as she did every few years, people with no knowledge of her ear patterns and/or family members could no longer identify her. Nor, therefore, would they know if she suddenly disappeared from her family. In fact, I soon realised that relatively little detail was known about this clan of elephants, apart from their being calm, friendly and used to the close presence of game-drive vehicles, something considered unusual at the time.

There was still more to contemplate. Though they enjoyed nominal protection under the head of state, they could hardly be considered a flagship herd when they were off-limits to all but a privileged few with money to stay at a couple of private lodges. And no special security measures had been implemented to protect them. What happened, I wondered, when they wandered into nearby sport-hunting areas or the unfenced Hwange National Park (where ration-hunting regularly took place)? The park had wildlife rangers, but I never encountered them patrolling the estate, which didn’t even have an anti-poaching team of its own. Equally concerning, trophy hunters had begun operating between two of the estate’s photographic lodges without a murmur of public concern.

So I inherited a tangled web of inaccuracies and confusion, with nothing implemented on the ground to give weight to the decree. Dedicated, long-term monitoring, intimate knowledge and special protection measures had, in fact, been lacking during the 11 years since President Robert Mugabe had issued his decree. Many, even within Zimbabwe, were not aware that these elephants existed, and there had been no notable government interest in them since their naming.

My timing was, in the eyes of friends and family, bizarre. I was working alone in a volatile country, not my own. People were fleeing violent land take-overs and here I was on a preapproved, but self-appointed mission to raise increased awareness of these particular elephants. What they urgently needed was an independent person with an open mind, a great deal of patience and tenacity, and a willingness to learn; someone who could be their voice among the political and economic madness that was Zimbabwe at this time. I was, it seemed to me, in the right place at the right time.

The elephants on the Hwange Estate were breathtaking. They were easy-going and glorious to behold. It was an opportunity and a privilege to get to know them intimately and I set out to learn everything I could about them as individuals and families. As a non-scientist I obtained input from members of Kenya’s long-term Amboseli Elephant Project (run by pioneer Cynthia Moss), who were all happy to share their invaluable knowledge with me. Right from the start, I vowed to continually remind the Zimbabwean authorities about the unique status of these elephants and to raise their flag high in a bid to secure their wellbeing.

My first task was to introduce structure to the naming of individual elephants. As had been done in Kenya, I assigned a letter of the alphabet to each family and gave all the elephants within that family group names beginning with it. There was the extended A family, the B family, C family, and so on. It made no sense to me to use numbers, as science prefers.

I classed as presidential elephants those families which, in 2001 and 2002, appeared to be spending most of their time on the estate. How frequently I encountered each of the families during my daily 8 hours in the field, day after day, year after year, made it possible to gauge which ones didn’t wander too far. Studies had found that older, independent males wandered over great distances, something my own sightings supported. So, given this fact, and also how regularly the adult males disappeared for good after wandering into nearby sport-hunting concessions, I concentrated on the family groups, taking thousands of identification photographs (right ear, left ear, front-on). Slowly and carefully, I began piecing together family trees……”