At the time of the French Revolution Queen Marie-Antoinette, when told that people had no bread, is reported to have said ‘Let them eat cake’. 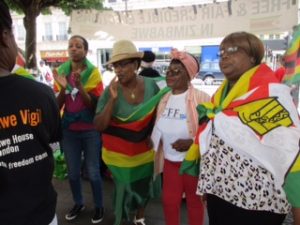 Some 230 years later Zimbabwe’s new Minister of Energy, Fortune Chasi, has made a similar remark in response to the 50% rise in fuel prices: ‘Let them buy electric cars’. (See: https://www.zimeye.net/2019/05/19/if-you-cant-get-fuel-buy-electric-cars-says-new-energy-minister/.)

The problem is that people have to money to buy electric cars and there is no electricity to run them. With the economy in freefall, the situation in Zimbabwe is deteriorating rapidly, making the authorities increasingly jumpy in fear of a Zimbabwe revolution.

Ben Freeth, the civil rights campaigner, in his latest newsletter says: ‘Sadly, there is a very significant deterioration in conditions on the economic front and in the general situation in Zimbabwe. Fuel queues are currently very long and chaotic. Electricity is sporadic. Hunger will be a major problem this year with more than half the population requiring international food aid. Prices continue to sky-rocket. Once again we have the second highest inflation rate in the world.’

Freeth says civil rights activists are increasingly targeted.  ‘Two weeks ago, a dear friend’s daughter was abducted in a raid by Central Intelligence Organisation (CIO) operatives at a venue where she was involved in training teachers about civic rights. After it was discovered that she and other teachers were missing, her lawyer father, David Drury, went to the notorious Harare Central Police Station to establish if she had been taken there.

‘All knowledge of their whereabouts was denied by the police and CIO. Remarkably though, in a dark corridor, a CIO member hinted that they were there. Dave called in other lawyers to assist, and they refused to leave the police station. Eventually, after some torture had been administered, his daughter and others were released.’

Freeth continued: ‘In another instance, a friend who had recently stayed with us, was abducted and tortured. Over many hours he was slapped after every question that was asked; he was also made to dig holes in the hard dry ground with his hands and had his testicles pulled.’ (See: https://media.wix.com/ugd/02876c_70dde214490c4a99b5e50cab276e1a81.pdf).

A pastor working with the poor in the Bulawayo area says there is widespread, and increasing, hardship and hunger. The harvest was about zero. Travelling up from Plumtree (Mat South) it was hard to see any sign of a harvest. There is no effective food relief programme in place. The price of food is ratcheting up steadily. Few have any real money to buy with USD but at the same time some sellers demand payment in USD.  The value of the RTGS dollars is reducing steadily. The mood is angry but the anger muted on account of the prevailing fear.

The pastor’s work is focused on a hundred or so destitute families who were evicted at short notice from their long-term homes by Zanu PF thugs greedy for their land.

A Vigil activist’s sister, who supports the pastor, reports on the plight of some of these people. Their name have been changed.

The Moyos lived at the Macdonald settlement for over 20 years. When their home was destroyed they were moved to a carpentry training centre since they had nowhere to go. The family included a young woman who was soon to give birth. They found a place to stay—in an adapted pigsty they had to clean out—shortly before she gave birth.  Baby Moyo was born with a clubfoot and has neurological problems and seizures. At their former home they farmed, growing vegetables and raising livestock.  They were able to eat and the children went to school.  They had lots of space and the children were free to roam. Now they have no way of earning an income and have to pay rent. The children were chased from school as there was no money for fees.

FOR THE RECORD:  21 signed the register.