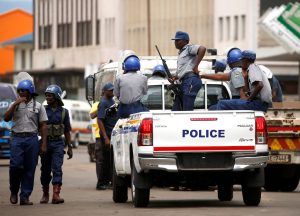 Their arrest follows a false story generated by the The Herald-Zimbabwe and the Chronicle that they are part of a group that went for a regime change training in Prague. The police, government officials and state media have been colluding to criminalize the work of human rights defenders laying unfounded allegations against civil society leaders as agents of regime change who want to topple the government.

The continued harassment of civil society leaders has seen a worsening of Zimbabwe’s human rights record.