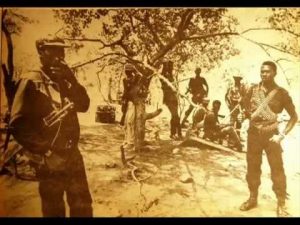 “Shining my torch ahead of me, I saw the motionless body of Comrade Lightning. His back was propped up against the door, his legs lying apart in front of him. As I reached him, I could see he was definitely still alive though only half conscious, if that. I don’t think he was aware of what was going on – he certainly didn’t recognise me. I had never seen a dying person at close quarters before but, though he was clearly still alive then, it did not seem to me he was going to live very much longer.”

“I started to drag Comrade Lightning down the corridor, but I immediately realised I would not be able to get him over the bodies of his dead comrades without help. So I ran back to fetch Mathias and between us – I don’t really know how – we succeeded in half-dragging, half-lifting Comrade Lightning to the front door. We managed to raise him up onto the donkey and secure him onto its back, binding him tightly with the ropes and straps which were to have been used to secure the farmer. I instructed Mathias to brush away all traces of footprints and hoof-marks from the ground. There were no donkey droppings to pick up, but I told Mathias to use his shovel to remove the lumps of dirt on which Comrade Lightning’s blood had fallen and had begun to congeal, and to brush away the marks on the ground made by his boots as we had dragged his body out from the front door. Mathias then took my torch and with a cloth returned to the farmhouse to wipe away all traces of blood which had fallen on the floor as we had pulled the body to the front door.

“As Mathias was doing this, I left as quickly as I could, leading the donkey by its halter. I turned to wave to Mathias as I left and could see tears were streaming down his cheeks. A few minutes later, I heard footsteps behind me. It was Mathias, who rejoined me when he had finished clearing up. I remember him telling me I had been crying and it was only then that the enormity of what had happened hit me. Up to then, I had clearly been running on adrenaline. Though I was hot and sweating, I started to feel cold and afraid.

“After all,” Mr Svosve reflected, “Mathias and I were little more than children – I had just turned 16; Mathias was still only 15.

“Only at that point did I think to check on Comrade Lightning. I put my hand on his forehead and felt a shiver go down my back. It was cold and dry. He was dead. I’d never seen a dead body before, but I knew he was dead; I just knew it. I felt no particular or new sadness when I realised he had died as I guess I had been expecting this to happen from the moment I saw him wounded and lying bleeding, almost motionless, but still twitching, inside the farmhouse. However, I did experience a terrible loneliness. Though Mathias was by my side, I suddenly felt as if my life was one big gaping hole.”

“I remember only too well what happened next,” said Mr Svosve. “There was a brief exchange between Mathias and myself.

“‘What shall we do now?’ asked Mathias.

“I turned and looked at Comrade Lightning and asked myself what he would say; it was as if I was appealing to him for guidance. As I did so I saw in my mind’s eye his face looking at me when we were sitting together discussing the farmhouse attack. I saw him turning to me smiling and saying:

Always make a plan, young Svosve. Weave it round in your head, chop holes in it, tease out its weakness; revisit it, test it and challenge it again and again until you know, until you are certain it will work.

“Never did I think I would have to make a plan about how and where to bury him,” said Mr Svosve. “Then it suddenly came to me, what I should do…

“Before daybreak, we had buried Comrade Lightning in a shallow grave hollowed out of the side at the bottom of one of the deepest dongas, at a bend in the dry river bed, and filled it in again, smoothing the sides to make it look as though no hole had ever been dug. Ten or 20 yards from the grave, we dug another hole to hide the brush and shovel, as well as the ropes, the straps and the makeshift saddle – indeed, everything which had been on the donkey’s back. We then shooed the donkey away and it ran into the bush. I felt sorry for it, but what else could I have done? We then hurriedly brushed over the prints of our shoes and the donkey’s hooves with our hands and then said goodbye. I walked back home to Gavaza and reached there as the sun was rising. Mathias walked away in the opposite direction.

“I never saw Mathias again. Wisely, he never returned to his family at the farmhouse. He headed off eastwards, making his way to Mozambique where he had intended to join the guerrillas as a fighter. However, he was told he was too young and would have to wait. I learned later he died the following year when the Rhodesian Airforce bombed and paratroopers stormed through the camps at Chimoio in Mozambique where Mathias and many other young people like him were living. He died as a statistic, one of some 3,000 young people killed in a single weekend in November 1977. The Rhodesians named it Operation Dingo; we called it a massacre.”

This is the first in a series of extracts from Tapestries of Difference by Roger Riddell. In an exclusive agreement with the author and Powerhouse Publications, The Zimbabwean will be publishing a series of extracts from the book over the next several weeks.  Tapestries of Differences is available in both paperback and kindle form from Amazon UK and Amazon.com. It can also be ordered direct from Blackwell’s bookshop Oxford, UK.