Zimbabwe Leeds Community (ZLC) group have raised over £500 to help support communities in Zimbabwe after the tragic events of Cyclone Idai at the beginning of March in Zimbabwe and Mozambique. 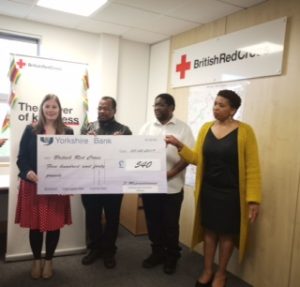 ZLC, which was established to bring together Zimbabweans based in Leeds and its surrounding areas, as well as help them integrate better in the local communities, presented the cheque to the British Red Cross – the first of a series of initiatives by the group for this cause.

The Red Cross launched an emergency fundraising appeal last month in response to the devastation caused by Cyclone Idai across areas of Mozambique, Malawi and Zimbabwe.

ZLC Chairman Solomon Mupandawana said that the devastating effects of Idai were sad and heartbreaking and that the team wanted to support the communities that have been affected by this severe humanitarian crisis.

“Many families were separated and have lost loved ones. Homes were destroyed and livelihoods washed away but we are pleased to have joined forces with the Red Cross to make sure that those who have lost everything are receiving the help they need to rebuild and we would like to thank everyone who donated.”

“We are looking to, in the coming months, work with other organisations and raise funds that will go towards re-establishing Chimanimani, with a primary focus on restoring hospitals and schools,” he added.

Cyclone Idai was one of the worst tropical cyclones on record to affect Africa and the Southern Hemisphere. The storm caused catastrophic damage, leaving more than 1,000 people dead and thousands more missing.

The British Red Cross have been working tirelessly over the last two months and deployed volunteers who were involved in search and rescue operations, aid distribution and facilities for temporary camps.

They have to date, provided 2,000 tarpaulins, 3,000 mosquito nets and 3,000 blankets from their regional warehouse in Harare and released emergency funds via their existing Community Resilience Programme in Zimbabwe.

Established in 2016, ZLC now boasts a membership of more than 300 Zimbabweans living in Leeds and nearby cities.