The MDC condemns in the strongest terms the abduction and brutalising of ARTUZ leader, Obert Masaraure by suspected state security operatives. 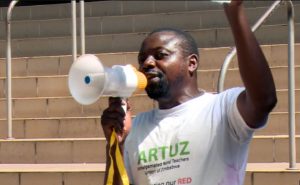 A State which perpetrates violence on men and women who stayed behind to serve the education system even when most teachers were leaving the country is shameless and ungrateful.
All they demand and rightfully so, is a living wage indexed in US dollars, better working conditions, reasonable teacher-student ratio and suitable facilities for the learners.
That is not criminal.

Masaraure has committed no crime, he is a patriot who is demanding better public delivery of education services.

It is clear that he is being targeted for his dissenting views.

In January, he was thrown in the supermax state penitentiary with robbers and rapists. Now armed bandits are sent to his house petrifying his family, torturing him, striping him naked and leaving him for dead.

The dark days are still with us that even signs of goodwill from the EU are being washed down the drain by reckless and ruthless behavior.

The MDC demands an end to the terrorising of CSO and Union leaders.

Those in prison must be given back their freedom unconditionally and those who attacked Masaraure must be brought to Justice.