HARARE, Zimbabwe – Chioniso Mutenda, 18 years old and nine months pregnant, lies on a bed in Mutambara Mission Hospital’s maternity waiting home. She is tired but relieved. Until recently, her safety and health were not assured. 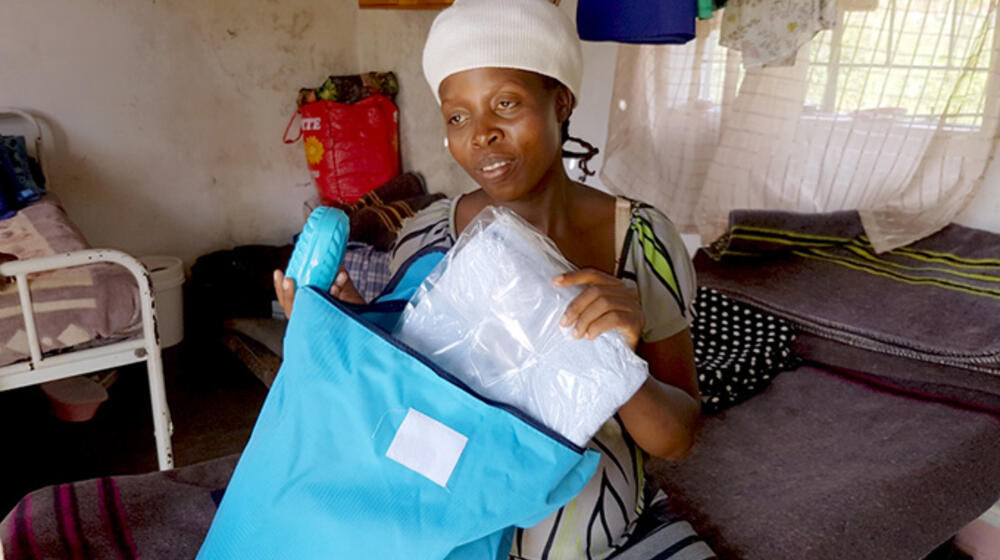 “We lost all our belongings – including the new clothes we had bought for the baby,” Tatenda Sithole, from Rusitu. © UNFPA Zimbabwe

Just weeks ago, she survived Cyclone Idai, one of the worst storms to ever strike in the southern hemisphere.

“The cyclone was powerful,” Ms. Mutenda recalled. “It destroyed houses, buildings and swept away people.”

The storm itself was a nightmare. “I was afraid I was going to lose my unborn baby,” the teenager says. “Many people had died and this thought consumed me.”

But when the winds died down, a new danger emerged.

Ms. Mutenda is from Vimba in Chimanimani, one of the areas worst hit by the storm.  Major roads and bridges surrounding her village had been destroyed.

“This meant it would be difficult to get to hospital when the time came, and I was close to my expected delivery date.”

Cut off from care

Three countries were battered by the cyclone. In Zimbabwe, Idai left a trail of destruction in Chimanimani and Chipinge districts. Here, the government reported 344 deaths and 257 missing.

When the extent of the devastation first became apparent, UNFPA staff at the offices in Harare knew that vulnerable women and girls like Ms. Mutenda would be in urgent need of humanitarian assistance, including critical sexual and reproductive health services.

This is because in Zimbabwe, complications during pregnancy and childbirth are the leading cause of death and disability among women of reproductive age, according to the Ministry of Health and Child Care.

And Ms. Mutenda’s situation was particularly worrying: pregnant adolescents girls are twice as likely to die during childbirth as women aged 20 years and above. And now floodwaters had cut her off from the medical attention she would need when she went into labour.

Vimba was difficult to reach even with a military vehicles.

“Walking to a health facility in my condition would have been impossible and giving birth at home was not an option – I needed professional health care,” she told UNFPA.

“It would not be possible for these pregnant women to quickly reach health facilities for timely services if the lives of both mother and baby needed to be saved,” UNFPA Country Representative, Dr. Esther Muia, explained.

And Ms. Mutenda was not alone in her plight.

In the two affected districts, about 67,500 women of reproductive age would need sexual and reproductive health services; of these, 1,250 were pregnant and among them, over 380 were living with HIV.

In the three months following the cyclone’s destruction, UNFPA staff anticipated 3,750 live births, among which 560 women were expected to experience pregnancy and childbirth-related complications.

UNFPA and partners went into action.

“We decided to target women who were 36 weeks pregnant and above, and those with previous high-risk pregnancies, to be airlifted to the nearest health facility,” said Dr. Muia.

Health workers conveyed the message: These women should report to a temporary clinic that had been set up at a nearby school.

Ms. Mutenda was among 25 pregnant women who responded to the call. They were airlifted to maternity waiting homes at Mutambara Mission Hospital, Chipinge District Hospital and Birchenough Bridge Hospital.

UNFPA is also working with the Musasa Project and the International Rescue Committee to distribute ‘mama kits’ to expectant women. The kits contain baby clothes, blankets, diapers and other supplies.

Tatenda Sithole, 23, from Rusitu in Chimanimani, received one of these kits.

“I had visited my mother in Ngangu when the floods struck. My mother’s house was completely destroyed, but luckily we all survived. My husband eventually sent word that although he had survived, our home had been destroyed too. We lost all our belongings – including the new clothes we had bought for the baby,” she described.

The kit “will help me dress my baby while I think of what to do next.”

As the affected communities set about rebuilding their homes and lives, a significant statistic emerges: despite facing serious vulnerabilities in the flood-affected regions, not one pregnant woman or her newborn has been lost due to complications of pregnancy or childbirth.