The decision by the Zimbabwean government to abolish the use of foreign currency for local transactions is welcome, but could have been implemented better, say analysts and various sectors of the business community. 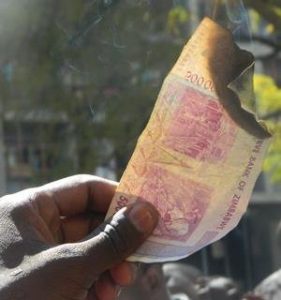 A protester opposed to the introduction of bond notes burns a Zim dollar note. (Memory Mataranyika)

Reacting to the new measures, which saw the Zimbabwean government outlaw the use of foreign currency for conducting local transactions, some said what government had done was not consistent with promises it had been making in recent months.

“The feeling is that there is lack of trust between the authorities and business,” Zimbabwe National Chamber of Commerce (ZNCC) chief executive Christopher Mugaga said. “As ZNCC we had a meeting, a fortnight ago, with the Reserve Bank governor, and at no point did he ever try to hint the pending introduction of a new currency.

“So that’s a dishonest engagement with business because what it means is that our proposals were ignored, so there is mistrust. The result is that business will not have confidence in the new measures,” said Mugaga.

Another business body, the Confederation of Zimbabwe Retailers, was, however, urging its members to embrace the new measures as “these will further improve competitiveness.”

“The country has got to move on and embrace its own currency and have independence in monetary policy formulation and implementation,” Confederation of Zimbabwe Retailers (CZR) president Denford Mutashu said.

He added, however, that there was a need to “quickly work on confidence building measures around the new currency and also deal with the political side of the economy by putting national interests ahead of own personal aggrandisement, egos and gains/benefits.

“The CZR further urges the RBZ to exercise restraint and prudence with the printing machine to safeguard the value of the Zim dollar, while the ministry of finance should desist from inconsistent policy pronouncements that has dented trust and confidence in the past.

“Further measures should be a product of continued consultations and engagement while the inclusive approach is encouraged forthwith,” said Mutashu.

Economist John Robertson said there was still “confusion” and called on business to “exercise caution”.

“We have to wait a few days for all of the inconsistencies in the new policy to be worked out and there could be amendments to the statements made on Monday because some of them cannot work.

Many businesses will be forced to close if they were not able to earn the money which they need to replace their stocks,” Robertson said.

He added: “I am suggesting that everybody wait for a couple of days before taking a decision on what to do, because it could be expensive to try to readjust and then see further changes in the next few days.”