The Zimbabwe Embassy refused to accept a letter from the Vigil on Friday and instead called the police to clear us away from the building. The letter protests at the involvement of Embassy officials in the asylum process – not that the Embassy waited to read it before pressing the emergency button. 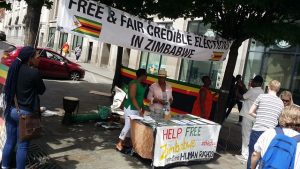 Ephraim Tapa, President of Restoration of Human Rights in Zimbabwe, led the delegation. He said: ‘We put the original letter into the post as per police advice and slipped a copy under the door of the Embassy. However, they repeatedly kicked our letter back and for a while it was one of us pushing the letter in from the outside and them pushing it out from the other side. Eventually we relented and retreated to our usual space. It was an interesting, fruitful but funny midday indeed!

How things have changed since the new Ambassador Colonel Christian M Katsande came to London last year, when he approached the Vigil, bought a copy of our book ‘Zimbabwe Emergency’ and said we must have a meeting with him. Now that we take up his invitation we have the door slammed in our face.

The involvement of Zimbabwe Embassy officials in Home Office interviews with asylum seekers is causing much alarm among the Zimbabwean diaspora in the UK.

We regard Zimbabwe now as a military dictatorship where human rights abuses are rife and opponents of the government are at serious risk. On top of that, we know that the economy is in a state of collapse with fuel and power shortages, growing poverty and widespread hunger.

Asylum seekers fear that the involvement of Embassy officials in the asylum process will lead to their identification as opponents of the government with consequent victimisation on return to Zimbabwe.

If anything we believe the Zimbabwean authorities should help expatriates achieve settled status in the UK so that they can acquire further education, train and work and remit foreign exchange to Zimbabwe while preparing to go back and rebuild the country.

We call on the Zimbabwe government to put an end to human rights abuse, investigate past atrocities and bring perpetrators to book, rebuilding investor confidence by facilitating clean politics.

Events at home in the past week have confirmed what we say in the letter, with the arrest of seven human rights activists accused of plotting against the government and reports that, while people are starving, millions of dollars are being spent on equipment for the security forces, including water cannons and tear gas cannisters.

For a taste of the paranoia gripping Zanu PF, we suggest you look at the Herald’s hysterical report ‘US-backed demo stutters (see: https://www.herald.co.zw/us-backed-demo-stutters/).