BULAWAYO, Zimbabwe (Thomson Reuters Foundation) - After Thomas Gumede’s father died in April, the Zimbabwean bus driver could not afford an expensive funeral. So, he applied for a burial plot through the local municipality. 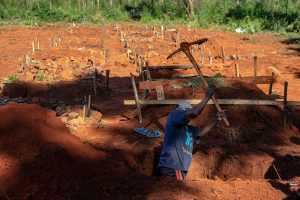 He never expected he would end up burying his father halfway across Bulawayo, a city in southwest Zimbabwe.

“There are no cemeteries near where I live,” said Gumede, 39, whose father’s burial plot is about 25km (15 miles) from his home.

“Imagine the transport costs,” he lamented. Each time he visits his father’s grave, he spends “at least $20 on petrol”.

As demand for housing continues to drive Bulawayo’s growth into surrounding rural areas, the city is struggling to find enough space to bury its dead, said Emmanuel Ndlovu, coordinator of the Bulawayo Progressive Residents’ Association.

World Bank figures show about one-third of Zimbabwe’s 16 million people live in urban areas, and that its urban population is growing around 2 percent annually.

“The truth is, the municipality has run out of land, as it cannot keep expanding and encroaching into rural districts,” said Ndlovu, whose organisation lobbies the local municipality on behalf of residents.

With cemeteries in and around the city full to capacity, local authorities are encouraging citizens to consider alternatives to traditional burial.

But attempts to promote cremation, double burials or even recycled graves are coming up against long-held cultural and spiritual beliefs.

When Gumede was asked if cremation could be an option for his family, he rejected the idea outright by invoking “ubuntu,” the southern African philosophy that says a person is who they are because of their connectedness to all of humanity.

“We did not even consider (cremation) as a family. It’s unheard of in our ubuntu as Africans,” he said.

Early this year, the Bulawayo City Council (BCC) held public meetings to try to convince residents of the benefits of cremation, but the idea was roundly rejected as “un-African”, said Ndlovu.

According to BCC spokeswoman Nesisa Mpofu, the city of about 1.5 million people has had fewer than 30 cremations since the start of the year.

But, like cremation, the idea has met resistance among residents.

“I have never heard of any such thing as a double burial,” said Lloyd Tshuma, a secondary school teacher.

Tshuma planned to avoid the stress of finding a cemetery space in the city by being buried in his family’s traditional plot in the countryside.

“I will be buried in my rural (area), as has my whole family,” he said.

Bulawayo municipality has also considered reusing old graves, a practice that is becoming more common in many parts of the world, as a growing number of countries find themselves low on space to bury the dead.

But Gibson Banda, a member of the Bulawayo United Residents’ Association, another organisation representing residents’ rights in the city, said families are not ready to bury loved ones in other people’s graves.

“There is a problem there because we believe people’s spirits linger in their graves,” Banda said.

“Imagine, then, your relative being buried among unknown spirits.”

BCC spokeswoman Mpofu noted that there are two new cemeteries planned for the city, but construction for both has been delayed.

But, once the two new cemeteries are finished “projections are that these will be enough burial space for all in the foreseeable future,” Mpofu said.

A CRISIS OF SPACE

Bulawayo’s efforts to make space for the dead mirrors its struggles to find affordable housing for the living.

According to Mpofu, the city has a housing waiting list of about 115,000 applicants and a target to provide homes for 3,000 people every year.

But as people continue to migrate into cities from rural areas, meeting housing targets has proven difficult across the country.

According to the finance ministry’s 2019 Infrastructure Investment Plan, the country has a backlog of more than one million who need housing.

About 400 kilometres north of Bulawayo, the capital Harare is also expanding at a rate faster than the municipality can cope with, according to city officials.

In April, minister of state Oliver Chidawu told state media that land shortages in the city were largely due to what he called “weak” government institutions that had allowed developers to buy up council-owned land, including plots that had been earmarked for cemeteries.

The Harare municipality office did not reply to several requests for comment.

In Bulawayo, council officials are stressing the urgency of finding enough cemetery space.

At a city council meeting in March, councillor Mlandu Ncube warned that the city needs “more graves than houses”.

The city’s ongoing shortage of burial sites has Gumede worried about the choices his family will face when he dies.

As he mourned his father, he hoped to take comfort in the idea that he could be near him again in death. Now, he fears that chance has gone.

“By the time I die, I have no idea where I would be buried,” he said.

“I would have loved to be buried next to the old man, but it’s clear that won’t happen.” (Reporting by Marko Phiri, Editing by Jumana Farouky and Zoe Tabary. Please credit the Thomson Reuters Foundation, the charitable arm of Thomson Reuters, that covers humanitarian news, women’s and LGBT+ rights, human trafficking, property rights, and climate change. Visit news.trust.org)