When in 2014 the then Zimbabwean government under the former President Mugabe introduced the bond coins in the pretext of providing change, little did Zimbabweans realize that it was the beginning of the disappearance of the United States dollar (USD) which people had gotten so accustomed to. 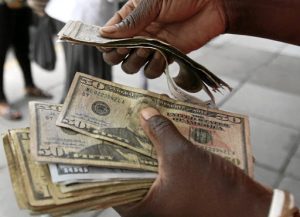 When in 2014 the then Zimbabwean government under the former President Mugabe introduced the bond coins in the pretext of providing change, little did Zimbabweans realize that it was the beginning of the disappearance of the United States dollar (USD) which people had gotten so accustomed to.

By November 2016 when the 2 Bond note was introduced to be followed by the 5 Bond note a month later, the USD effectively disappeared.
At first, withdrawals were half-bond, half-USD, and thereafter subsequently dwindled until they were all bonds. Interestingly to note was that Bond and USD withdrawals were done separately.
The Bond withdrawals were done using a withdrawal slip while the USD withdrawal was done using the ATM card. Later on, all this disappeared and everything was collated together into bond notes. For good measure, the Bond and USD was pegged at 1:1 so that it appeared natural for one to buy using a USD10 and above to be changed using the Bond.
However, under little circumstances could one get a USD change having bought using a Bond note.
This was daylight robbery.
Later on, supermarkets were seen hoarding the USD and slowly but surely, the USD disappeared from the market and became a scarce commodity for the general populace but a preserve for Osipatheleni (illegal money changers) and top government officials and those with such mentality.
Over time, the general populace got the shock of their life to realize that all their hard earned forex had turned into Bond notes.
At this juncture, I shall remind the readers of this blog that to open those accounts people had used forex and they were, therefore, foreign currency accounts. But later on, the account holders were told that those accounts were no longer forex accounts but had become Bond notes accounts. As to how they had overnight transformed into Bond notes only accounts, it is only Mangudya and the top ZANU-PF officials who know.
People were then told to open fresh accounts of forex called Foreign Currency Accounts (FCA) commonly known as the Nostro Accounts.
What is important however is to note that in each transitional period, the government most likely stole large sums of money from the poor masses. To prove that, one can make reference to the USD10 million dollars that was recovered by the soldiers from Ignatius Chombo’s house or the millions recovered at Kudzanayi Chipanga’s house during Operation Restore Legacy in November 2017 but whose fate was never made public.
One may not be far from the truth to conclude that the money that was stolen during that period may actually be the same money that was given to the illegal money changers (Osiphathelani) whom most of the unverified reports claim they are linked to top government officials.
From the above, it becomes substantial to conclude that more than a result of carelessness; the Zimbabwean economic crisis was most likely a deliberate creation by the government so that it legitimizes its ways of stealing from the general populace and I hereby hold it responsible for the long-suffering of the Zimbabwean people.
Moving on, and fast-forwarding to the 24 June 2019 banning of the multi-currency regime, it is not any different and the stealing is going to be massive this time around.
According to the Statutory Instrument142 of 2019 , the government through the Reserve Bank banned the use of forex as legal tender in Zimbabwe.
In this blog, however, I do not detail all the contents of S.I. 142 of 2019 and my interest is Section 3 (1) (a) and (b) of the instrument.
It reads: 3 (1) Nothing in section 2 shall affect –
(a) The opening or operation of foreign currency designated accounts, otherwise known as “Nostro FCA accounts”, which shall continue to be designated in the foreign currencies with which they are opened and in which they are operated, nor shall section 2 affect the making of foreign payments from such accounts;
(b) The requirement to pay in any of the foreign currencies referred to in section 2(1) duties of customs in terms of the Customs and Excise Act [ Chapter 23:02] that are payable on the importation of goods specified under that Act to be luxury goods, or, in respect of such goods, to pay any import or value-added tax in any of the foreign currencies referred to in section 2(1) as required by or under the Value Added Tax Act [Chapter 23:12 ].
Looking at the above, in all legal terms and honest, the act sounds good and promising, giving hope to the Nostro account holders.
But it coming from a government which is not known for keeping promises, it is only a matter of time before the Nostro account holders cry foul.
Again one will not be far from the truth to conclude that just like the introduction of bond notes in 2014, or any other financial/monetary policy before that or thereafter, this is just another way of this government to symphony money that they never worked for and that they do not deserve.
It was going to be better if the stolen money could be used to bring this tottering economy back to its feet but knowing the traits of those in charge, the money will be channelled to self-enrichment and other nonsensical ventures.
My point is that the earlier you withdraw your forex from these unreliable banks the better, and the earlier you caution those who are sending you forex to stop sending it the best. Zimbabwe should have its Zim-dollar than to reap where it did not sow.
In a nutshell, the black market is there to stay until this government completely reforms (if ever they are willing to).
As a parting shot, Osiphatheleni is there to stay as long as things are like this. It needs proper, serious and well-thought reforms, not these piecemeal and haphazard temporary measures that will do nothing than worsening a situation already in the decaying stage.
What Zimbabweans are rejecting is not the Zimbabwean dollar but useless money that does not buy anything and useless policies that are meant to enrich a few individuals and leave the masses suffering.
Post published in: Business