Poignant reflections of elderly priest of the war years: how and why he became a mujiba and then chose to become priest 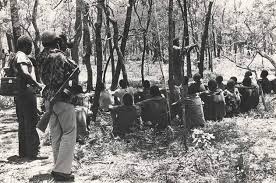 Without rising, Father Ambrose Ngoni welcomed Emma to the Mission dining room with a smile and motioned to her to sit opposite him. When she was settled, he bowed, crossed himself and said grace, then invited them to join him in their simple three course meal. As they started to eat, Father Ambrose asked Emma to explain in more detail why they had come to St Michael’s and he listened carefully to everything she said.  When she had finished, he picked up the clean knife he hadn’t used to eat his sadza and proceeded to play with it, his eyes staring out ahead of him as his fingers set to work. He was lost in thought, pondering how much he should reveal.  Then he carefully laid his knife down on the tablecloth and, pushing his hands down on either side of his chair, sat up and smiled across at his guests.

“It brings it all back,” he said. “You are both too young to know what it was like in those days, so it will probably not seem surprising when I tell you I, too, was involved in that war of ours, even if in a pretty small way. But it affected the rest of my life, as it did so many other people.” Both Emma and Simon wondered where this was going.

“I grew up in the Wedza area, about 30 miles west of here. I was about 14 at the time the guerrillas first came to our area, and I was keen to help as best I could. The guerrillas started having all-night rallies with the villagers – pungwes – and I went to one of these with a couple of friends. Soon after that, we joined what was then called the ‘struggle’, becoming what were known as mujibas. You’ve heard of them?” Ambrose looked across at Emma who nodded.

“What I did didn’t amount to very much, though at the time I felt enormous pride in what I then thought was a huge contribution,” said Ambrose.

“On one occasion when it was my turn to be on night duty, I was allowed to help carry some landmines and watch as two of our fighters laid them in the sandy road and primed them; I was amazed by the speed with which they worked and the deafening noise they made when they exploded. On that occasion it was a local bus which hit the landmine and three innocent civilians were killed. Although I hadn’t known any of them, the whole incident upset me deeply. I continued to act as a mujiba, though perhaps a little more sceptically, and certainly a little wiser.

“Those landmine deaths which I witnessed with my own eyes were a sort of trigger which set me thinking in a new and different way. It was really this incident plus a growing desire I felt within me to help what I began to call people-in-a-muddle which came together and led me to decide to become a priest.”

Then, realising himself he needed to get back to the point, Ambrose said a little less earnestly, “I had cousins, two of them, who joined the ZANLA army and who never came back. We made numerous enquiries but they all drew a blank. We assume they were killed but try as we might, we have never had any firm news of what befell them. They sacrificed their lives for us and ended up as two more names to be added to the thousands our country inexplicably forgot.

“So,” Ambrose drew a deep breath, “I am all too well aware of what your family must have felt during all those years. Even firm evidence of death is far, far better than having to live through even one more night of uncertainty.”

“Almost as soon I arrived here to be the Superior at St Michael’s, some five or six years ago, I became increasingly aware of the sheer numbers of people who are still deeply troubled by what happened during the war years, even though it was so long ago. And just like the continuing suffering of the families whose loved ones never returned – like yours and mine, Emma – the pain continues and can be just as deep for so many of those who survived, though all too often their troubles lie unseen where they can so easily fester.

“Well, as no one had done this here before, I decided to set up counselling sessions for those in need of psychological support, and the response was astounding. Over the years, literally hundreds of people have gone through the basic group talking sessions I started running, sharing with each other, under my guidance, their fears and talking about what was troubling them. As they talked it became clear so many of them were still deeply distressed by the traumas they had suffered.”

“There are so many whom society has forgotten and let fall between the cracks. In recent years, as jobs have become scarcer, wages eroded by inflation and the cancer of corruption spread rapidly across the country, I have become weary of politics. I have grown increasingly angry at the growing affluence of our politicians and the continuing grinding poverty of the mass of the people. People’s lives need to improve now; they need a better future not next year, not when they next vote, but today”.

Ambrose looked across the table to Emma. As their eyes met she realised she had been wrong a moment ago. What he was saying was relevant to what they had come for. Emma was beginning to grasp the importance of the emotional pressures which guerrilla warfare forced not only upon the fighters but the civilian population, those caught in the middle. If she was to succeed in drawing out from the people she was hoping to talk to the truth of what they knew about the circumstances surrounding Joshua’s probable death, she realised she would have to do more than simply ask them to tell her what they knew. She would need, above all, to treat them with the respect they deserved.

This is the fifth in a series of extracts from Tapestries of Difference, a novel by Roger Riddell. In an exclusive agreement with the author and Powerhouse Publications, The Zimbabwean will be publishing a series of extracts from the book over the next several weeks.  Tapestries of Differences is available in both paperback and kindle form from Amazon UK and Amazon.com. It can also be ordered direct from Blackwell’s bookshop Oxford, UK.