Never forget that it was not anyone in the opposition who destroyed the value of our own currency when we had one. The culprits are known...Zanu PF, cabinet ministers and Jomic members who believed a witch doctor could produce refined diesel from a rock. 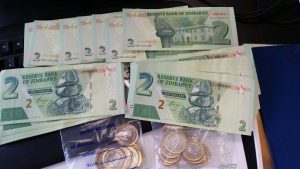 And yes, Gideon Gono who used to imperiously call himself “Your Governor” and who was constantly praised by Robert Mugabe for the “highly innovative” interventions of printing more money and shamelessly affixing his signature to a one hundred trillion Zimbabwe dollar bill.

Clearly, dollarization (use primarily of the US$) restored transactional sanity. That was supposed to buy us time to get our house in order, create the right political and public policy environment, get rid of the corrupt and clueless leadership that got us in this mess and elect competent leaders of integrity who could manage our country’s affairs and fiscal and monetary policy well.

That is what needed to come first before reverting to local currency. After all, it was never the currency itself that was a problem, but the people who managed it and their destruction of viable sectors of our economy.

I would have no problem with going back to our currency right now if I was convinced that Emmerson Mnangagwa is an improvement on Robert Mugabe.

I would be confident if John Mangudya was an improvement on Gideon Gono.

I would be at the forefront of advocating for the restoration of the Zimbabwean dollar if I was confident the government would not raid people’s FCAs, and if I believed those managing our monetary affairs will not bend to political pressure to simply print more money or create phantom electronic currency to ease liquidity instead of opting for the tougher choices that would rev up economic activity and contain government expenditure.

I would be confident in these measures if Mthuli Ncube was not the same man whose financial institution (Barbican Bank) was shut down by the regulators he now regulates for poor management, bad governance and suspected externalization of funds.

I would be the most vocal champion for our own currency if I believed that the cartels operating in Zimbabwe are not linked to government officials, and if I was confident that those found to have violated the law and to be guilty of human rights abuses would actually be held accountable under the law.

I would support this move wholeheartedly if I believed that Zanu (PF) would be content with the share of state funds it is entitled to under the Political Parties Act and that it would not raid State coffers.

Unfortunately the horse has already bolted the barn as they say. The did is done. No one who loves our country would wish more suffering on our people.

However it will take more than our cheering this move to make it work. The ball is firmly in the government’s court to implement the radical political and public policy reforms that would give people and markets the confidence they know what they are doing.

Everyday Zimbabweans are baited by Zanu (PF) and regime apologists to prove we have not lost the “virtue” of patience that we have become known for. It’s time however to demonstrate our understanding that refusing to learn from history disguised as patience is not a virtue, and that we know we have a constitutional right to be impatient with those in power and to hold them accountable.