HARARE (Reuters) - Zimbabwe has banned farmers from selling maize to anyone other than the state Grain Market Board as the government moves to keep prices of the staple crop down after a severe drought cut output. 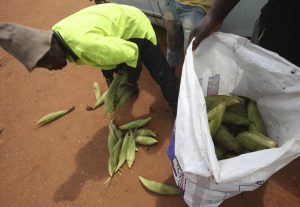 A Zimbabwean man buys maize cobs in Harare, February 5, 2016. President Robert Mugabe has declared a state of disaster in most rural parts of the country severely hit by a drought, with 26 percent of the population said to be in need of food aid, the government has said in a statement. REUTERS/Philimon Bulawayo

Under regulations published on Friday, any individuals or companies that buy maize directly from farmers could face up to two years in jail. The Grain Marketing Board will be the sole buyer of the crop and will then sell it to millers.

The southern African nation expects its maize output to drop 54% this year, to 776,635 tonnes, following the drought, which a U.N. agency says will leave 5 million people in Zimbabwe needing food aid.

“No person or statutory body or company or entity shall buy or otherwise acquire any maize from any farmer or producer otherwise than through the Grain Marketing Board,” the notice said.

Those who breached the regulations would be fined three times the value of the maize “or eight hundred (Zimbabwe) dollars ($121), whichever is greater, or in default of payment, to imprisonment for a period not exceeding two years.”

The government early this month doubled the producer price of maize to ZW$1,400 per tonne.

The new regulations immediately raised concerns that the controls will create a black market for maize, which will lead to shortages, and that the grain agency will likely sell at subsidised prices at a time when the government has said it wants to remove subsidies in the economy.

“It’s a very retrogressive measure, straight out of the manual on how to create shortages and price distortions,” an agriculture expert, who declined to be named, said.