HARARE(Xinhua) -- Zimbabwean President Emmerson Mnangagwa on Thursday toured the new Parliament building that is being constructed by a Chinese firm and expressed satisfaction with progress so far. 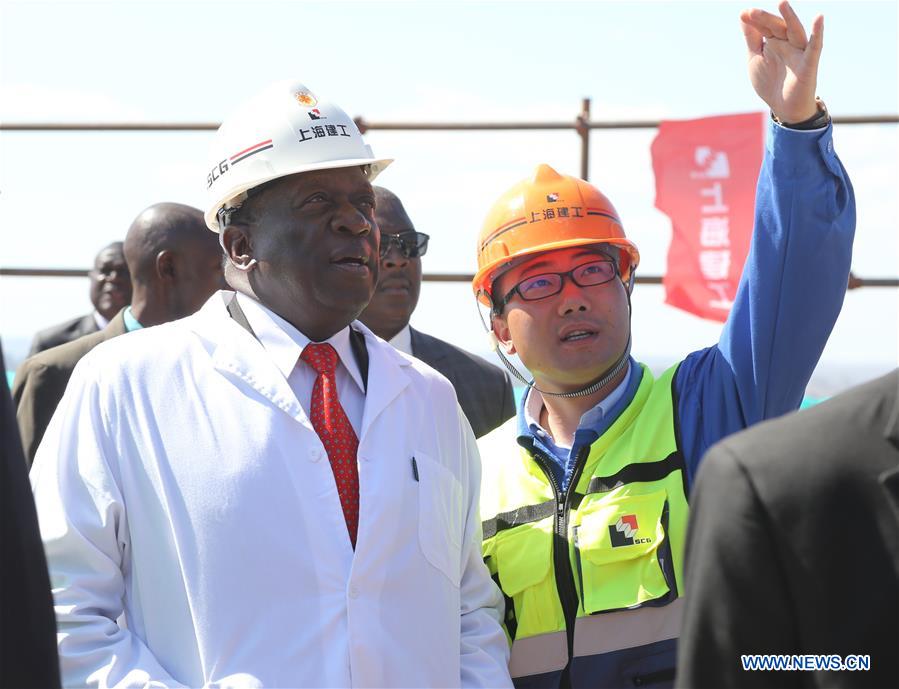 Zimbabwean President Emmerson Mnangagwa (L, front) tours the construction site of Zimbabwe’s new parliament building in Mt. Hampden, on the outskirts of Harare, Zimbabwe, on June 13, 2019. Zimbabwean President Emmerson Mnangagwa on Thursday toured the new Parliament building that is being constructed by a Chinese firm and expressed satisfaction with progress so far. (Xinhua/Zhang Yuliang)

“I am happy that the construction project is on course and that so far no incident has happened. I hope that this good record will continue until completion,” the president said after touring the project that is being undertaken by Shanghai Construction Group.

He said Zimbabwe was grateful to China for the grant it provided for the construction of the new building in Mt Hampden on the outskirts of Harare, and the site for a new satellite city near the capital.

“This edifice will be one of the most unique parliaments in our region. Besides being unique, its demonstrative of our deepened and comprehensive strategic partnership with China,” Mnangagwa said.

The six-storey structure has a construction time frame of 32 months but the contractor is optimistic of completing the project ahead of schedule in 29 to 30 months.

According to the contractor, the project is two weeks ahead of schedule and will be spared from the ongoing power cuts affecting the nation.

Mnangagwa appreciated the fast pace at which the project is moving, and challenged Zimbabweans to adopt the work ethic of the Chinese.

He expressed hope that the Zimbabwean engineers and artisans working on the project will benefit from the skills and technology from the Chinese construction giant, reputed for building the world’s second tallest building in Shanghai.

Mnangagwa applauded the company for its reputation in Africa, and hoped it will get more infrastructure development projects in the country.

The Zimbabwe parliament building is the company’s first construction project in Zimbabwe.

“The company has multiple skills in the area of construction of infrastructure. I have no doubt that the company will be selected to implement some of the projects that we are currently discussing and seeking finance for,” he said.

The president hailed China for being a solid friend of Zimbabwe, acknowledging its continued political and economic support to the country over the years.

Trade ties with China were also growing and this was good for diversification of the country’s economy, he said.

Chinese ambassador to Zimbabwe Guo Shaochun said the new parliament building was one of the largest grant-aided projects to be undertaken by China in Africa in recent years.

He said the project had come at an opportune time as it will afford Zimbabwean lawmakers an ideal environment to discuss important legislation to drive the country’s economic agenda of becoming a middle income economy by 2030.

“The new parliament building is the latest remarkable outcome of our cooperation,” Guo said, adding the infrastructure would help to prove wrong critics who say cooperation with China does not bring much benefit to African countries.

The current Parliament building has become small and this was constraining the work of the lawmakers, he said.