HARARE (Reuters) - Zimbabwe’s interim currency fell to a new low on the black market on Thursday and local firms were demanding payment in U.S. dollars as a hedge against inflation, which is running at its highest in a decade. 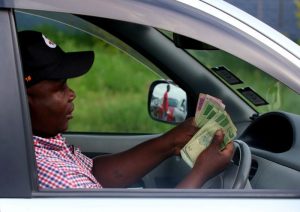 A motorist counts money as he queues for petrol in Harare, Zimbabwe, January 18, 2019. REUTERS/Philimon Bulawayo

The RTGS dollar has plunged 60% against the U.S. dollar since its introduction in February, and public sector workers’ demands for a second pay rise this year could undermine a government drive to convince lenders of its fiscal discipline.

President Emmerson Mnangagwa won a disputed election last year on a promise to revive a Zimbabwe economy shattered by decades of mismanagement by his ousted predecessor Robert Mugabe.

The RTGS dollar, introduced by the government on Feb. 22 as the first step towards a new currency by year-end, traded at 10.5 to the U.S. dollar on Thursday, 14.3% lower than a week ago.

On the official interbank rate, the RTGS currency was pegged at 6.2 compared to 5.9 a week ago.

Zimbabwe formally adopted the U.S. dollar as its official currency in January 2009, when most Zimbabweans had already ditched the hyperinflation-wrecked Zimbabwe Dollar. A decade later, analysts see the same situation repeating itself.

More than 80% of Zimbabweans earn RTGS dollars but from bricks to rentals, car parts and many grocers, prices are now pegged in U.S. dollars.

That has seen inflation race to 97.86% in May, its highest level in a decade, eroding salaries and savings and causing Zimbabweans to fear a return to the hyperinflation of 2008 when the rate reached 500 billion percent, leaving many destitute.

“I earn 400 RTGS$, where do I get the U.S. dollar? The government should fix this before we all die,” said Robson Ndiringepi, a security guard manning a supermarket in Harare.

Public sector workers are negotiating a salary hike, the second this year, which the justice minister told parliament on Wednesday would be announced soon.

That would put more pressure on the state budget just as the government has started a monitoring programme with the International Monetary Fund in a bid to create a track record of fiscal discipline that could secure it future funding.

Patrick Imam, IMF resident representative in Zimbabwe said the central bank should quickly allow the RTGS dollar to float freely, allow exporters to sell dollars at the interbank rate rather than surrender them to the central bank, and raise interest rates to curb inflation and avoid “spontaneous re-dollarisation.”

“Everyone now anticipates the RTGS dollar will weaken further, so businesses increase prices and workers demand more and the cycle continues. We are chasing our tails,” John Robertson, a Harare-based economist said.