African leaders from across the continent have dutifully congratulated Boris Johnson on becoming the new British PM. 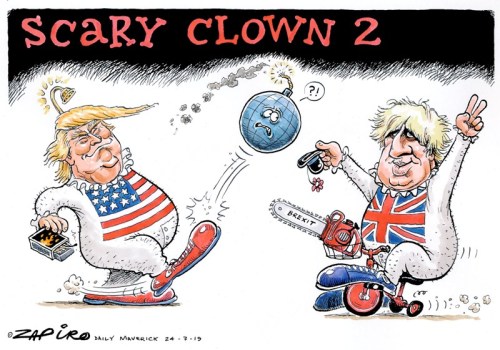 © 2019 – 2019 Zapiro (All Rights Reserved). Originally published in the Daily Maverick in 2019. Used with permission. More Zapiro cartoons at http://www.zapiro.com.

This thanks to the votes of an ageing, white, male Conservative party membership of only 92,000 people. With an extreme right-wing cabinet, and the prospect of a ‘no deal’ Brexit, the UK is poised for a dangerous new era. As a Washington Post comment piece argues, it really is no laughing matter.

What is Africa making of it all? One of the most fulsome messages of congratulation came from President Mnangagwa of Zimbabwe, combined with a fawning piece in the state-run Herald newspaper. Desperate to normalise relations and seek investment, the Zimbabwean government has struck on a journalistic piece by Johnson penned in 2015, which blamed Tony Blair for the mess Zimbabwe was in, the propping up of Mugabe and the failure to pay compensation to white farmers.

As ever with Johnson’s writing – and much of his political conduct to date – journalistic flourish comes before facts. As anyone reading this blog will know, the history of UK-Zimbabwe relations, especially over land, is much more complex. It may be however that, with the UK concerned about post Brexit trade(despite the bluster, very few deals have been signed) and Zimbabwe keen to be re-admitted to the Commonwealth and become accepted again by the international community, common cause will be found.

To the relief of many, Johnson did not abolish the Department for International Development, nor reinstate the disgraced Priti Patel as minister – although shockingly she got the much bigger Home Secretary post. That said, the department’s mandate will no doubt continue to shift towards promoting the fanciful idea of ‘Global Britain’, focused on promoting UK trade and investment through ‘aid’.

Maybe this will deliver the bilateral partnerships (and cash) that Mnangagwa so desires. But the Zimbabwean government should be wary. What will the terms be? Just as with dealings with the much more powerful (and rich) Chinese,negotiating aid relationships with strings attached is fraught with dangers. With the prospect of a Johnson premiership some years ago on this blog, I argued that we should all be ‘scared, very scared’. Well now it has come to pass, and scary times are upon us.

The ever-astute South African cartoonist Zapiro captured it well in the image above. Trump and Johnson seem to come from the same stock. George Monbiotcalls them and their ilk, the ‘killer clowns’. Dangerous, below a thin veneer, and backed by oligarchs interested in making money out of the chaos created by the ruthless destruction of the administrative state. Buffoonery, overt racism, and an overwhelming sense of privilege (of different sorts), combine with a lack of attention to detail, and a proclivity to make up facts to suit the argument. But both are smart, wily and surrounded by clever, dangerous people – from Bannon to Cummings –  with radical political agendas to pursue.

The link to a wider form of authoritarian populism is clear in their respective political projects. Along with close links to oligarchic capital and big business, they see their political base rooted in disenchantment with metropolitan, ‘elite’ politics, which has emerged as a consequence of a politics of austerity and the failure of ‘progressive neoliberalism’. Unlike the traditional Left, right-wing populist politicians across the world – from Bolsanaro to Modi, Orban, Salvini, Duterte and Erdogan – have been able to mobilise this discontent effectively – despite its obvious contradictions. We can expect a UK election soon with a similar regressive, populist rhetoric.

This inward-looking nationalism has consequences for how international relations are viewed. Johnson, like Trump, has a dismissive, colonial, often racist, approach to Africa. His litany of comments is well known. He has argued that Africa (which he described as ‘that country’) would be better off if still colonised, arguing that “the problem is not that we were once in charge, but that we are not in charge any more” and ‘‘The best fate for Africa would be if the old colonial powers, or their citizens, scrambled once again in her direction; on the understanding that this time they will not be asked to feel guilty”. Meanwhile, he claimed that the Commonwealth is supported by the Queen “because it supplies her with regular cheering crowds of flag-waving piccaninnies”. There is a long catalogue that could have come from the mouth of a Victorian imperialist.

Some will dismiss such comments as flourish and frippery. I believe this is mistaken. These are not jokes; they are deeply offensive comments from someone who is the British PM. They reveal much about the current state of the Tory party and British politics. Zimbabwe – and Africa more broadly – should be worried. It certainly is no laughing matter.

This post was written by Ian Scoones and first appeared on Zimbabweland.