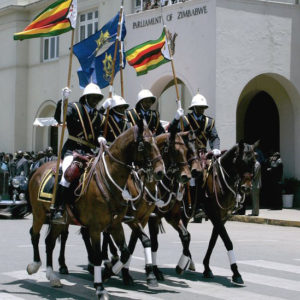 Both Houses of Parliament will Continue Sitting This Week

Please do not reply to this e-mail by clicking on “Reply”.

For all correspondence please use [email protected].

For website and social media information see the end of this bulletin.

Money Laundering and Proceeds of Crime Amendment Bill [link] and

The National Assembly gave both these Bills their First Readings on Thursday 18th July.  They were immediately referred to the Parliamentary Legal Committee [PLC] for its reports on their consistency or otherwise with the Constitution.

Tuesday 16th July saw major progress on the Second Reading stage, with the presentation of a joint report on the Bill, and on the public hearings held on it, from two Portfolio Committees – (1) Industry and Commerce and (2) Foreign Affairs and International Trade.

The joint report was presented by Hon Joshua Sacco, chairperson of the Industry and Commerce committee.  The report [link] welcomes the objective of the Bill – to establish a One-Stop Investment Services Centre – but recommends changes to many aspects of it.  The changes include a time-frame for operationalisation of the One-Stop Centre and time-frames for completion of registration of investments and licensing [five days is suggested]; the extension of the One-Stop Centre’s sector coverage by adding desks representing the health sector, small and medium enterprises, parks and wild life management, tourism and local authorities; changing the composition of the ZIDA Board by having a majority of its members from the private sector, instead of  Government; appointment of the Agency’s CEO by the Board, rather than by the President [in order not to undermine the Board];  relaxation of the Bill’s present restrictions on employment of non-Zimbabweans, so as to allow investors to have senior personnel of their own choice;  the need for ZIDA to decentralise and devolve its operations to provinces and districts under central supervision.

Hon Paradza, chairperson of the other portfolio committee involved in the report, underlined the need to implement the report’s recommendations, saying that “the Bill, in its present form, is not a good Bill at all”.  He also emphasised the disquiet felt among committee members when the Office of the President and Cabinet prematurely – before ZIDA has a legal existence – advertised for applicants for appointment to a senior post in ZIDA.

Hon Nduna made one of his trademark “clarion calls”, this time for the ZIDA Board’s composition to reflect the preponderance of women in the population, asserting that “what men can do, women can do better and they are more trustworthy”.   See further under Coming up in Parliament This Week, below.

This Bill was not dealt with at all last week.  Its status remains as it was described in Bill Watch 35/2019[link].   See further under Coming up in Parliament This Week, below.

Bills being prepared for gazetting

The following Bills are not presently available from Veritas, but will become available once they have been gazetted:

Other Business in Parliament Last Week

Although it could have been expected, there was no announcement about when the Minister of Public Service, Labour and Social Welfare would table this report in Parliament [for background see Bill Watch 34/2019 [link]].  This was despite the Speaker holding her to her promise let Parliament know by 11th June when she would present it.

Welfare of MPs   On 18th July MPs debated a condolence motion following the death of Hon Kaston Gumbwanda, ZANU-PF MP for Zaka East on 25th June.  Besides lamenting the passing of their colleague, MPs of all parties used the occasion to complain about the Government’s general lack of proper regard for the welfare of MPs and for Parliament as a State institution.

Report of Public Accounts Committee on Ministry of Finance and Economic Development shortcomings [link]  Hon Biti, chairperson of the Public Accounts Committee [PAC] presented the committee’s hard-hitting report on a long list of Ministry of Finance and Economic  Development’s “non-compliance issues” identified by the PAC.  The report indicates where literally billions of US $s have not been accounted for.  It is shocking to read.  The PAC also criticised the attitude of senior officials who had appeared before it.  The list of issues reported cites failures by the Ministry and its officials to comply with the Constitution, the Public Finance Management Act and the Public Debt Management Act.

The Senate had no Bills to consider.

Senator Tongogara presented her motion calling on Government and stakeholders, in particular traditional and religious leaders to vigorously enforce the law against child marriages and inculcate cultural values, saying that before Independence such marriages were a rare occurrence.

Senator S. Ncube moved that the Senate take note of the Thematic Committee on Gender and Development’s Report on Cancer Treatment and Control in Zimbabwe [link].

This Bill is item 1 on the Order Paper for Tuesday 23rd July, for continuation of the Second Reading debate with further contributions from MPs and, possibly, the Minister’s winding-up speech responding to the numerous suggestions made for the improvement of the Bill  The Minister has already had much to think about on that score [see above for the portfolio committees’ joint report [link] and MPs’ contributions so far.

Continuation of the barely-started Committee Stage is item 2 on the Order Paper for 23rd July.  Most of the seven pages of amendments [link] proposed by the chairperson of the Portfolio Committee on Primary and Secondary Education, Hon Misihairabwi-Mushonga still have to be considered].  The Minister of Primary and Secondary Education has already told the House [when winding up the Second Reading debate on 18th June] that he will accept most of the amendments recommended by the Portfolio Committee – see Bill Watch 31/2019 of 21st June [link].

If, as expected, the PLC report is received, the House can be expected to make a start on theSecond Reading stage of the Bill.

Like last week, items 3, 4 and 5 on the Order Paper are continuation of the adjourned debates on Government motions to take note of: (3) the Judicial Service Commission’s annual report for 2018; (4) the Zimbabwe Human Rights Commission’s report on the 2018 Harmonised Elections [link]; and (5) the Zimbabwe Electoral Commission’s report [link] on the same elections.  Item 6 is continuation of the long-running debate on the President’s speech at the opening of the current Parliamentary session ten months ago.

Items 7, 8 and 9 are private members’ motions that have been waiting in line for a long time: (7) Hon Khumalo’s call on the Government to improve the lot of war veterans, war collaborators and ex-detainees and specifying how; (8) Hon Mushoriwa’s proposal to transfer to local authorities the collection of vehicle licence fees and toll fees currently [accruing to ZINARA] as a means of improving road maintenance in urban areas; and (9) Hon Dr Nyashanu’s call to Government to stimulate economic development with incentives for the productive sector.

Over 80 written questions with notice await Ministerial responses, some from as long ago as November 2018.  Recently added questions include one asking whether the Minister of Home Affairs and Cultural Heritage is considering extending the opening period of Seventh Street/Borrowdale Road past State House in Harare, from the current 6 am to 6 pm to 6 am to 9 pm in view of the high volume of traffic using this roadway. Another is asking the The Minister of Justice to consider reducing the fees charged by the Master of the High Court on deceased estates.

Coming Up in the Senate This Week

Bills  Senators will again be waiting for Bills to be transmitted from the National Assembly.

Item 1 on the Order Paper for 23rd July is Senator Timveos’ call on Government to establish an adequately empowered entity to address challenges facing pensioners and insurance policy holders following the Justice Smith Commission of Inquiry on Pensions and Insurance Benefits.

This item has dropped to item 7 at the very end of the Order Paper.  As the end of the present session is near, one wonders whether it is going to be allowed to lapse and be forgotten.

The number of written questions on the Order Paper has risen to 27.  Senator Mavetera has several questions for the Minister of Lands, Agriculture, Water, Climate and Rural Resettlement seeking information about the funding and yields of Command Agriculture this season, wheat farmers and incentives to undertake wheat production, maize delivered to GMB by A2 farmers in the 2018-2019 season, and whether there are repercussions for A2 farmers who underutilise their allocated farms.

General Notices [GNs]  Only two GNs were gazetted, notifying the President’s appointment of Mr Gumisai Gapare as Zimbabwe’s Ambassador to Brazil [GN 1166/2019] and the Minister of Finance and Economic Development’s signature of a Currency Framework Agreement with Zimborders in connection with the Joint Venture Project for the Modernisation of the Beitbridge Border Post [GN 1167/2019].

General Notice [GN]  GN 1168/2019 [link] notifies the appointment by the Minister of Finance and Economic Development of members of the Board of the Infrastructure Development Bank of Zimbabwe [IBDZ].  The eight persons named include only one woman, which is at odds with the national objective of Gender Balance [Constitution, section 17].