A diplomat was famously described as ‘an honest gentleman sent to lie abroad for the good of his country.’ Lieutenant-General S B Moyo, Zimbabwe’s chief diplomat as Minister of Foreign Affairs, fell somewhat short of meeting these requirements in London this week. 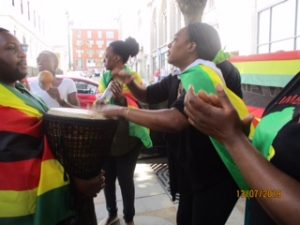 The Vigil does not think he is an honest man or that he is acting in what we regard as the real interests of Zimbabwe. But the general was certainly prepared to lay down his lies for his country.

Wherever he spoke he spouted the same Zanu PF fatuous deceit and self-delusion until the anger of the diaspora culminated in a rowdy scene outside the Royal Institute of International Affairs at Chatham House in London, where he had to be bundled into his car to escape after trying to persuade the world that Zimbabwe had reformed under Mnangagwa.

The tenor of General Moyo’s diplomatic abortion was set by an interview on BBC Radio’s top current affairs programme on Wednesday, ahead of a Global Media Freedom Conference arranged by the British Foreign Office.

He was asked by the BBC why Zimbabwe was listed 127th out 180 countries in the world press freedom index and why Reporters Without Borders say harassment and intimidation of journalists by the security apparatus is standard practice. Moyo blathered blithely that the new dispensation was ‘unlocking freedoms’ and said media houses had been allowed to set up and freely express themselves. No word about opening up television and radio to independent broadcasters or about the Zanu PF-controlled state press or about the closing of the internet and social media in the government clampdown on protestors in January.

Questioned about the violence by the security forces, Moyo said it was a matter for the police. Why had there been no prosecutions of soldiers who had gunned down unarmed people? ‘We’ve got a lot of cases under investigation’.

Asked about Mnangagwa’s remark that the January crackdown was a foretaste of things to come, Moyo insisted that the President had been misunderstood. The President was really saying the people had freedom unless they misbehaved.

The Minister assured his listeners that all that was needed was a little ‘rebranding’ of the police– the Zanu PF notion that just changing the name of something will make it different. You can listen to the interview from 1:35 to 1:43 hours inton the programme on this link: https://www.bbc.co.uk/sounds/play/m0006lr4.

Moyo’s assistant, Nick Mangwana, the Zanu PF Secretary for Information who accompanied the Minister said ‘It’s tragic that the sceptre of violence during protests we see in Zimbabwe forcing the security services to act has reared its ugly head in foreign land discrediting not the Government but the hoodlums themselves and embarrassing peace loving Zimbabweans.’ Zimbabweans in the UK know that the only sceptre here is held by the Queen and we do not believe she was outside Chatham House to protest against Moyo’s visit, welcome as she would have been (see: https://www.herald.co.zw/just-in-gvt-condemns-uk-hooligans/).

Zimbabweans in the UK diaspora know Nick Mangwana well as a hypocritiical asylum seeker who went on to lead Zanu PF UK and who has now gone on to his just reward as a flunky of the military regime.