THERE are fears for the health of former Zimbabwe President Robert Mugabe after stark pictures emerged on social media showing the ex-dictator looking weak and frail alongside his favourite son.

The former hardman who ruled what used to be Rhodesia with a rod of iron from 1980 until he was toppled in 2017 has been receiving regular hospital care in Singapore.

In the photo of Mr Mugabe in the wheelchair he looks slumped and shrivelled and is sporting a white beard and is wearing a black Adidas tracksuit with matching Adidas trainers.

Son Robert Junior, 27, who plays basketball for Zimbabwe is also wearing a black Adidas t-shirt in the photograph that is thought to have been taken recently while in Singapore.

Photographs he is said to have posted in June show Robert Junior sitting with his father also kitted out in his favourite tracksuit and his second wife Grace who he married in 1996. 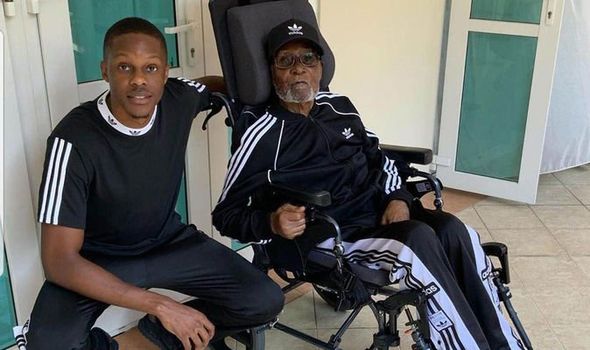 It is not clear if they were taken in Singapore where he receives medical care or at his lavish mansion in Zimbabwe.

A relative was quoted by a Zimbabwe newspaper saying: “Of all Mugabe’s children he is the one who has spent the most time with him.

“He has been a rock to the former president”.

It was said Robert Junior has been taping his father’s memoirs since he was deposed in a coup in 2017 by his long term protégé Emmerson Mnangagwa who is now president.

Mugabe’s health is in question after President Mnangagwa said the ex-leader could no longer walk (Image: Jamie Pyatt News)

Mr Mugabe’s last major public appearance was at a press conference in July 2018 on the eve of Zimbabwe’s election in which he vowed he would not vote for the man who ousted him.

However his relationship with President Mnangagwa – known as The Crocodile – has thawed since then and when he won the election Mr Mugabe sent his congratulations.

At a rally at Mr Mugabe’s rural home in November, President Mnangagwa said Mr Mugabe was no longer able to walk and was being treated at a hospital in Singapore and was not well.

He said: ”He can no longer walk but we will take care of him”.

Concerns for Mr Mugabe’s health have arisen on several occasions during his life.

Just three years ago a hoax claimed the then President had died mid-air on a trip from Dubai.

Laughing at the story when he landed at Harare airport, Mr Mugabe said: “Yes, I was dead. It’s true I was dead.

“I resurrected as I always do once I get back to my country. I am real again.”

There were also two false claims Mr Mugabe was close to death in 2009.

In one report he was said to have been taken to Dubai for treatment following a “serious scare”, while in a separate incident from the same year he was reported as being close to death in a Singapore hospital.