Idyllic Scene of a Motor-Bike Ride through the bush 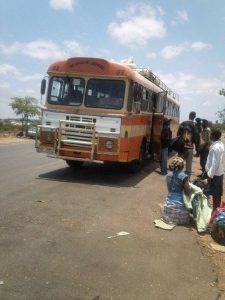 As she stepped down from the bus, she was greeted by a blast of hot air, a smiling face, a hand to shake and a warm greeting: “I’m Francis. You are most welcome, Emma.”

“Ah, Francis,” said Emma smiling and relieved they had met up without any problem. It was clear Francis was happy to converse in English.

She looked about her and was pleased to see some of the white-uniformed student nurses had straightened hair like herself, so it couldn’t have been her hair which had marked her out as different. She then thought it must have been her clothes as hardly any other female bus passengers were wearing jeans. Or could it have been her dark green rucksack, the old Fjällräven Kånken backpack she had picked up cheaply at an Oxfam shop before that teenage trip to Paris?

It turned out to be none of these as Francis next said, “You look just like Emerentiana, Sarah’s sister, I recognised you immediately from your face.”

The bus was late, and Francis was keen to get going. He pointed to a well-used but still shiny blue Chinese-made motor-bike standing under the shade of a tree some yards ahead of them. To disguise her nervousness, Emma said laughingly she had never ridden on a motorbike before, but Francis assured her she would be fine as long as she hung on to his waist, did what he said and always took her legs off the foot-rest as soon as she felt the bike skidding to stop it toppling over into the sand. He smiled and said she would soon get the hang of it, but the mention of skidding only increased Emma’s worries. She was glad she was wearing jeans and had brought her backpack, which she slung over her shoulders. She put her arms round Francis’ waist after she got on as instructed and pressed her body close to his. There was more room on the seat than Emma had thought. She felt snug and they were away. As Francis had predicted, the bike started first time.

Their ride to the Makoni homestead took them about a quarter of an hour. The first couple of hundred yards were to prove the fastest, ridden on firm gravel with few corrugations. This gave Emma the confidence she needed, which Francis added to by tilting his head backwards and shouting to make himself heard above the engine noise in order to tell her how good she was at keeping her balance. They both laughed and she loosened her grip around his waist, only to tighten it again when they took a sharp left turn and the bike hit the softer sandy road. A small skid, feet off the foot-rest, but Francis kept the bike upright and on they went.

At times, the road narrowed to what seemed to be more like a footpath, and occasionally even the footpaths disappeared. When this happened, Francis had to skilfully navigate the bike through virgin bush, weaving his way around bare tree stumps, their branches and bark torn off by modern-day hunter-gatherers – firewood collectors. At other times, Francis took to the wide-open plains, known by their Afrikaans name, vleis, joining scotch-carts and bicycles travelling along the same unmarked but clearly well-known routes. Francis knew every twist and turn of the way, unsurprisingly, as this was the route of his daily commute. He deliberately rode more slowly than he normally did, even when carrying passengers, because today’s pillion-rider was someone very special: their relative from far-away England.

As they rode on, Emma began to focus less on the bike and more on her surroundings. Her mood shifted first from calm to contentment, then to sheer delight as a sense of carefree joy began to bubble up inside her. With every new experience – eyeing Africa from afar from the plane, touring Harare yesterday and seeing rural Zimbabwe race by on this morning’s bus ride – Emma had felt she was getting ever closer to the Africa she had had in her mind’s eye. Now she felt she was really in that Africa: she could not only see it, but could touch it and smell it.

They passed ant-hills – termite mounds – some massive red-soil edifices constructed over decades, rising three, four, eight and even ten feet from the ground. Next to one as they slowed in the sand and almost came to stop, Emma witnessed ants hurrying along in lines and understood how apt the term “soldier ants” was. She spied a dung beetle dining on fresh cow-droppings; she saw lizards, some lying lethargically on a passing rock, others disturbed by the bike’s vibrations, scurrying away to avoid being crushed under the bike’s wheels. She had her second sighting of weaverbirds and, just once, caught sight of the brilliant reds and crimsons of a group of carmine bee-eaters. She smiled on seeing – and smelling – goats in search of food, some carefully pulling low-growing leaves from shrubs to avoid their protruding barbs, others standing erect on their hind legs, balancing momentarily in the air, tempted by the juicier leaves on the higher branches. Francis steered his way along the bush carefully so as not to pass too close to the thorny shrubs which lined their path, and at times Emma had to lean in quickly to avoid being pierced by their long, menacing spikey needles.

Emma waved to a nearby group of smiling barefooted boys in oversized torn khaki shorts, skilfully turning the long steering wheels of the cars they had created by twisting and wrapping bits of old wire together, their wheels covered in rubber from old car tyres. In the distance she returned the wave of two giggling green-uniformed young girls hitching rides on a scotch-cart packed with firewood, their bare feet dangling down from its open-ended back. They passed two teenage boys, clearly close friends, walking triumphantly hand in hand, their unlinked hands each carrying a small dead bird brought to an early death by stones skilfully propelled by the home-made catapults now triumphantly slung over their shoulders.

This is the eighth extract in our series from Tapestries of Difference, a novel  by Roger Riddell. In an exclusive agreement with the author and Powerhouse Publications, The Zimbabwean will be publishing a series of extracts from the book over the next several weeks.  Tapestries of Differences is available in both paperback and kindle form from Amazon UK and Amazon.com. It can also be ordered direct from Blackwell’s bookshop Oxford, UK.