If substantial change is desired in Zimbabwe, then the time has come to stop treating the country as a democracy, flawed or otherwise, and view it as a military dictatorship with a thin civilian veneer. 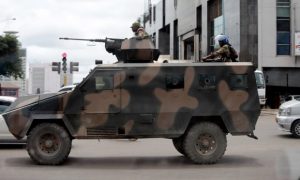 The civilian control over armed and security forces is arguably the most crucial, yet least appreciated aspect of democracy. The simple reason is that, as RJ Rummel so conclusively demonstrated in Death By Government, states kill more of their own citizens than any other factor save for natural disasters. No number of violence-free elections can guarantee a democracy as long as a military is not subject to parliamentary oversight.

However, Chapter 4, Article 111 of the Zimbabwe Constitution (2013) grants the president the sole authority to declare war, which can only be overturned by a two-thirds majority in both Houses of Parliament. This is an extraordinary power which severely limits the oversight power of Parliament to control the military in Zimbabwe. In other words, civilian control over the armed forces is fairly weak.

The Zimbabwean military has been content to be the power behind the throne, seldom removing the velvet glove to exercise its iron fist. The removal of Robert Mugabe was one exceptional case where the glove came off, another is the current state of violence. As long as the civilian politicians have acceded to the interests of the military, senior officers have stayed in their barracks. If substantial change is desired in Zimbabwe, then the time has come to stop treating Zimbabwe as a democracy, flawed or otherwise, and view it as a military dictatorship with a thin civilian veneer.

International actors have long struggled to negotiate with military regimes, even when their actions are far more egregious than Zimbabwe’s. As in Burma, the international community has been unable to prevent the genocide against the Rohingya. Similarly, efforts to promote human rights in Latin American juntas in decades past were fruitless.

Unfortunately for the people of Zimbabwe, the options are stark. History has shown that in such similar cases the pursuit of peace and justice can be mutually exclusive. Senior officers are unlikely to withdraw from politics unless granted some degree of amnesty (as in Brazil) or delays of prosecution (as experienced in Argentina). Very rarely do military rulers quietly give up power.

A first step towards both peace and justice, however, could be to make the restructuring and reform of the security sector a necessary requirement of all loans and aid projects. SADC, Ecowas and the AU have successfully run similar programmes and view security sector reform as necessary post-conflict programmes. The programme for Zimbabwe would require the restructuring of not only the military, but the police, judiciary and intelligence services as well.

As successful as some of these projects have been elsewhere in Africa, it is not a cure-all for Zimbabwe, but a comprehensive reform programme for the military as a necessary step towards a more complete civilian and democratic control of the armed forces. Without such democratic norm training, any other intervention is unlikely to prove stable or enduring. DM