Gweru- over 10 primary and secondary school teachers and a community gymnastics coach participated in the first ever gymnastic workshop organised by Midlands Gymnastic Association. 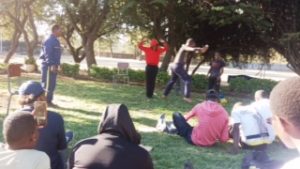 The two-day workshop held at Stanley Primary school, which ended on Sunday, was aimed at equipping the 14 teachers with gymnastics and teaching skills so that they will be able to nurture talent from the grassroots at their schools.

Some of the teachers came from as far as Gokwe, Shurugwi, Zvishavane, Mberengwa, Mvuma among other districts. 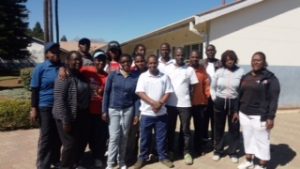 Facilitator of the workshop,who is a life member of Zimbabwe Gymnastics Association, Erasumus Garakara said the workshop’s main objective was to empower the teachers with relevant techniques needed to teach pupils to perform gymnastics.

“This is an effort from the national association to spread the sport of gymnastics throughout the country.

“Apparently we have only one provincial association; so we are trying to help provinces, equip them with the gymnastics knowledge that is necessary for them to start provincial associations. To Start competition leagues and from there we know that from the competition leagues, we have a pool of talented children who will represent the nation,’’ he said.

Garakara who is also, President of Harare Province Gymnastic Association said due to lack of resources, their drive is not on artistic gymnastics which he said is too expensive but aerobic gymnastics which is in line with the new curriculum.

Scores of participants hailed Zimbabwe gymnastic for the training, describing it as historic and important.

“It was the best training ever, considering that gymnastics was not being taken care of in terms of workshops. I am sure this workshop is going to be beneficiary to most coaches out there, “said Sungano Zhou, a Dadaya primary school teacher from Zvishavane.

Mr James Muzvondiwa, a trainee from Chaplin High applauded the organisers for their “commitment and work done in developing talent in the Province.

One of the organisers of the workshop, Lazurus Mkwapatira, said the teachers and one community member from Gweru, Siphosami Ndlovu were trained in a way that will enable them to explore their students’  and community talent.

Mkwapatira said the attendance was very encouraging and overwhelming since all went according to plans.