Among the many talented artists rising from the City of Kings, in the last five years Bulawayo’s Nomashawekazi Damasane, also known as ‘Lady Tshawe’, has been a rising star. 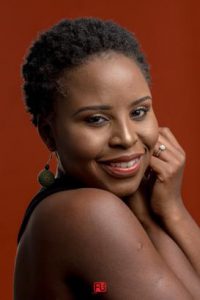 The multi-faceted young artist has gone from the launch of her book in 2014 to a leading role in the musical productions “Tellers” which debuted in Harare in May 2017 to much acclaim; Scriptwriter for “The Unified Women Project” – an intercultural collaboration between Nhimbe Trust and the Young Vic Theatre, London in September of the same year; the staging and performance in ‘Revelations of You’, her first stand-alone production of live music and poetry in August 2017; a leading role in “Blood Tongue – The Musical” in 2018, and most recently the play ‘6.55’ – her first theatre production, written and directed by herself.

She is a long-time member of Nhimbe Trust’s Women in Theatre & Television programme, which works
for the empowerment and advancement of women artists and is supported by Nhimbe’s partner Africalia, who have contributed widely to the arts in Zimbabwe over the last decade.

Lady Tshawe comes from a rich line of Nguni thinkers and creative workers with her father, a poet
himself, having been her strongest influence. Educated in Bulawayo, she went on to graduate with a BA
degree in Drama and Ethnomusicology at Rhodes University in South Africa, and has since enriched the
cultural scene in the City of Kings (and Queens) with her performances and new developments in wide
circles in the artistic community.

The play 6.55, choreographed by Mehluli “Gomez” Dube, with a cast comprising Musa Sibanda, Nyarie S
Nyika, Agnes Ncube and Sithabile Ndubiwa, was staged at the Bulawayo Theatre on 15 August this year,
and well received with respected theatre practitioners applauding her work.

Josh Nyapimbi, executive director of Nhimbe Trust, said “It’s encouraging to see Noma breaking new
ground professionally. She is an amazing performer and has been an integral part of the WITT
programme.”

Memory Kumbota, Nhimbe’s Children in Theatre and Television (CITT) Trainer said “Another ground
breaking show from a new writer and director proves theatre has a future in this country if given the
right support.”

Director of Intwasa Festival koBulawayo, Raisedon Baya, said “Very good. Loved the mix of music and
dance into the story. Good direction. Good audience too.”
“The show was amazing, great performance from the actors. The script was really good. The play talked
about a deep and sensitive issue that almost everyone could relate. It was a different approach from our everyday theatre. Great attendance as well, it was almost a full house” said Norbert Kumocha – CITT
Playwright Director and Actor.

Lady Tshawe said “I am just a lady whose desire is to tell stories. Whether through characters she plays or through poetry. I realized I had so many stories unheard stored in my computer and I took the risk to direct. It hasn’t been an easy journey, taking risks most women have called a man’s territory. For me, it was and still is about sharing stories that are inside of me. And if it means breaking status quo to have those stories heard, I will break the status quo. Last night, 6.55 premiered! And my heart is full! The theatre was full, and the responses I got after the show made my heart smile. The cast was phenomenal, and Gomez Dube’s choreography made the show. Special thanks to Chypo for the
lighting, and Tino for amazing sound. Thank you to Bluez Café and Nhimbe Trust for everything!
…Theatre is life!”