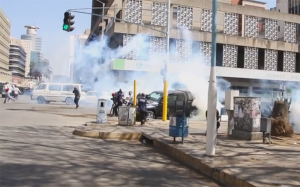 The Crisis in Zimbabwe Coalition (CiZC) is deeply concerned about the deteriorating socio-economic conditions and closure of democratic space in Zimbabwe.

This media brief seeks to draw your attention to the socio-political and economic challenges currently facing the country. We are worried about the political situation in our country and with an escalation of human rights violations and the collapse of the economy and resultant social service nets resulting in the millions of citizens seeking refuge in neighbouring countries and beyond. Fresh cases of arbitrary arrests, unlawful detentions and abductions of unarmed civilians and civil society leaders are being reported. Multiple threats and intimidation by government officials against trade unions, civil society leaders and ordinary Zimbabweans are continuing unabated. To date, about 22 civil society leaders and human rights defenders and opposition leaders have been charged with subversion since the beginning of the year.

In August alone, police arrested over 80 citizens in Bulawayo, Chitungwiza and Harare on allegations of committing public violence. In Harare, medical facilities have recorded more than 20 cases of people who were brutally assaulted by police including a journalist, Fani Mapfumo, who was covering a peaceful protest on the 16th of August 2019. The injured include women and children.

The democratic space continues to shrink and Zimbabwe with the banning of demonstrations in all major towns signalling a state of emergency. The judiciary is now heavily compromised and is being systematically used to deny the people their fundamental rights as enshrined by Section 59 of the constitution and the expansive bill of rights in the Zimbabwean charter. We fear that if the situation continues unchecked, there are greater chances of an escalation of social unrest and instability in Zimbabwe. This might result in regional instability as Zimbabweans seek food, shelter and refugee in neighbouring countries.

Consequently,  this month, the government of Zimbabwe, through their mouthpiece the Herald newspaper on the 16th of August 2019 made sensational allegations that civil society leaders who were attending the SADC People’s Summit in Tanzania were planning to demonstrate against President Mnangagwa and were being trained to commit acts of banditry. The state went on to publish over 20 names of civil society leaders that they claim were planning to smear the image of the country. The allegations resulted in the detention and harassment of the activists upon their return to Zimbabwe. We view this move as calculated and desperate tactics by the government to instil fear amongst activists and the civil society in general.

Regionally, we  participated at this year’s SADC Peoples Summit held at the National Museum in Tanzania from the 13th to the 18th of August 2019 and the summit urged  SADC to ensure the continuation and deepening of the political reform processes in Zimbabwe, Malawi, Tanzania, Lesotho and Zambia in terms of human rights, democratization, constitutionalism, free and fair elections and protection of the rights of the citizens.

It is our view, therefore, that the political processes in Zimbabwe must seek to promote and consolidate democracy, peace and human security and we also maintain that resolving the current political crisis in the country is a pre-requisite for democracy and economic development.

Similarly,  in May this year, Zimbabwean authorities arrested 7 civil society leaders upon their arrival from a meeting in Maldives and charged them with subversion despite the absence of evidence that shows that they were trained in banditry.

Turning to the economy, there is a perpetual economic meltdown (resulting from the current political crisis) which has resulted in high levels of inflation and an increase in domestic debt which has compromised the government’s capacity for the provision of social services and social protection for ordinary citizens. Zimbabwe’s economy is collapsing under the burden of a) grand corruption and b) the power of a military elite which is subverting constitutional processes. The recent 76% cost of living adjustment offer to civil servants which will see the least-paid worker taking home $1 023 (less than USD100) per month is inadequate due to the high cost of living. Equally, a majority of Zimbabweans are surviving on less than USD1 a day is impacting negatively on ordinary citizens and has the potential of fuelling more conflicts in Zimbabwe.

Thought the government through Statutory Instrument SI 142 of 2019 outlawed the use of multiple currency, prices and cost of living remains benchmarked in foreign currency, hence the need to peg wages and earnings to the united states dollar.

The country is also facing an extreme drought with estimated figures of nearly 5.5 million people–a third of Zimbabwe’s population  needing food assistance by 2020,  according to a UNICEF  report in June.

Based on the above background, which should be understood in the context of the ongoing political and economic crisis bedevilling the country, we propose the following urgent interventions:

1)    We reiterate our call for internal and inclusive stakeholders’ dialogue in Zimbabwe. It is our conviction that the dialogue process must involve all stakeholders and a national visioning process that has a civil society, government, political parties, business, religious groups and labour unions among other critical stakeholders on board. As an import of the dialogue process should produce a clear timed roadmap to the demilitarization of civilian political processes and the restoration of normalcy by focusing on key political, economic and social reforms.

2)    We urge regional and international blocs to promote and support efforts at arresting the economic downturn in Zimbabwe based on a clear reform roadmap and encourage Zimbabwe to adopt and implement pro-poor and inclusive economic policies. Efforts at economic transformation, stabilization and growth should be aimed at achieving inclusive sustainable economic growth and development.

3)    We urge the Government of Zimbabwe to stop the crackdown on human rights defenders, activists, media and the opposition, uphold and guarantee citizens’ rights as enshrined in the Zimbabwean Constitution and other regional and international human rights treaties and statutes. The Global Political Agreement (GPA) issues guaranteed by SADC/AU remain at the centre of the crisis especially the constitutional reform process. Therefore, the full implementation of the country’s constitution is equally important in promoting democracy in Zimbabwe.

4)    We urge SADC and the AU to decisively ACT by urgently and adequately intervening in the Zimbabwe situation. We are concerned that SADC is focusing on the non-event of the so-called sanctions when the country is in flames as the regional body is rendering itself irrelevant as it surely is not showing leadership on the political question in Zimbabwe. Without addressing the political and legitimacy crisis, the socio-economic dislocations will send shock waves to the entire region.

5) Call upon the Zimbabwe, government to prioritize and prepare for humanitarian assistance programs for the millions facing starvation in Zimbabwe.