The Zimbabwe government has made it clear that the much vaunted new constitution counts for nothing. The MDC fulfilled the legal requirement to inform the police before Friday’s demonstration in Harare but the government nevertheless banned it at the last minute. 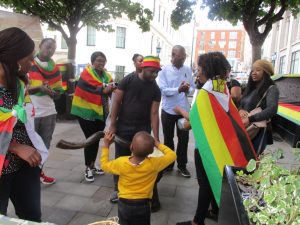 As usual, peaceful people were beaten and tear-gassed by the police for their temerity in protesting against the government. Among them were women singing protest songs. One helpless protester was repeatedly kicked. But they escaped comparatively lightly considering that half a dozen human rights activists had earlier been abducted and tortured.

Interestingly, the government blamed the abductions on CIO agents loyal to Mugabe – just as they blamed the Harare killings by soldiers in January on people who had ‘stolen’ military uniforms.

This time the MDC was forewarned by wild police allegations that the opposition was planning violence and they finally called off the protest to save unnecessary bloodshed.

But the damage to the government’s reputation is inestimable. The UN human rights office said the government should heed the people’s legitimate grievances over the economic situation and stop cracking down on protesters.

Who is going to take seriously Zimbabwe’s ‘open for business’ message when the constitutional rights of the people are trampled underfoot like this? Even Mugabe is so disaffected that he says he doesn’t want to be buried in Heroes’ Acre, prompting Mnangagwa to immediately send a delegation to Singapore to warn Mugabe that he had no option but to accept the badge of shame.

Heroes’ Acre badly needs Mugabe – and, for that matter, Mnangagwa and the rest of the Zanu PF leadership. As it is, hardly anyone bothered to go to the annual ceremony there on Monday.

Like Disneyland, it needs some new attractions. Fill up Heroes’ Acre as soon as possible.