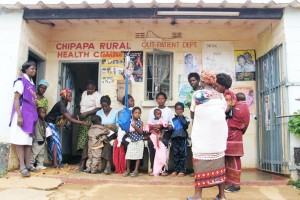 When hospitals are few and far between, these shelters become homes away from home for expecting mothers. Find out how countries around the world are getting mothers to book in for better births starting right here close to home.

When hunger came to Tsholotsho, it came first for the town’s women.

The men were mostly gone from this quiet outpost, about 120 kilometres north of Bulawayo — or so it often felt. Every family that could, sent its men to South Africa.
Brothers and fathers and uncles and sons hopped the border to find work and send money back. They left behind the women to watch the fields and tend the homesteads.

So when the maize, a staple here, began to shrivel and die late last year it was the women who scraped the last flecks of corn from the undersized cobs. It was women who decided when it was time for the family to begin forgoing one meal a day to preserve the supply just a little longer.

Nearby, the shelves in the local shops remained crammed full of tinned viennas and long-life milk and a thousand other foods. But as crops failed and the country’s economic crisis jacked prices higher and higher, everything on the shelves had become too expensive for many here to even consider buying.

That is a problem that has spread across Zimbabwe, where the United Nations World Food Programme (WFP) estimated earlier this year that almost one out of every three Zimbabweans would require food assistance.

But failing crops and skyrocketing prices have had an unexpected consequence: They’ve made the local maternal waiting homes — or amadumba — for pregnant women even more popular than usual.

The amadumba are far from new in Zimbabwe. They’re older than the country itself. The first waiting rooms here were opened before independence, by mission hospitals. But the programme expanded rapidly in the 1980s and early 1990s and by 1997, Zimbabwe had 255 of these waiting mother shelters, according to the World Bank.

From Zimbabwe to Indonesia, countries have turned to maternal waiting rooms to

fill a pernicious gap in rural health care. In many places, women in small communities often live too far from hospitals and clinics to make it to one in time when they are about to give birth. By waiting out the last days of their pregnancies in facilities near hospitals, they can ensure they’ll have access to a trained professional and a safer birth.

It is a simple idea, and a good one. In Zimbabwe in the mid ‘90s, the death rate among babies one week or younger — whose mothers had stayed at the amadumba — was almost half that of infants whose mothers had travelled to hospital from far-flung communities after labour started, 2003 World Bank research showed.

In 2015, the World Health Organisation recommended that maternal waiting homes be established close to healthcare facilities in remote areas or those with limited access to healthcare. This was, in part, to help reduce not only infant mortality but also deaths among pregnant women although the organisation noted that more rigorous studies were needed to figure out just how well homes worked to curb these deaths.

Zimbabwe’s 2015 demographic and health survey found that about 3% of all women will die during pregnancy, childbirth or within two months of giving birth.

Senzeni Fuzwayo knew what happened when there was a medical emergency in her rural community outside of Tsholotsho. People looked for a car, and if one couldn’t be found (and it usually couldn’t), they loaded the sick person onto a donkey-drawn cart and made the jolting 10-kilometre journey to the hospital.

So, when the nurses at the Tsholotsho district hospital told her during a prenatal check-up that she could spend her final days before her delivery in a dormitory near the hospital, she was intrigued.

And when they said she’d be fed during her stay, she jumped at the chance. “Pregnancy is painful for many [of] us , especially now when our crops failed and we did not harvest anything [this year].” Her own family survives on her husband’s piece work — taking care of people’s cattle or selling firewood to scrape together a few dollars. But it was rarely enough.

“I am happy that during our stay we do not have to bring food from our homes as we [are] given nutritional food packs by the hospital,” she adds.

“We currently have about 60 expectant mothers here,” says Mary Ndlovu, the sister in charge at the Tsholotsho waiting room on a recent morning, as she shows a journalist around what looked like a boarding school dormitory, with 20 narrow beds crammed into two rooms.

In an ideal world, she explains, each of them would stay only a week. But “some have been here for close to a month because home is a long way from the hospital and many have little to eat in their homes”.

Food rations have become a major draw for the women staying here, who are each given a food pack stocked with enough cooking oil, cereals and pulses to last a fortnight.

For the aid agencies providing the rations, the food packs provide an “incentive” for rural women to come to the homes, according to the World Food Programme and the United Nations Children’s Fund (UNICEF), which are jointly providing the packs.

And they’re not alone in asking what’s on the menu. A 2017 Cochrane Review of 29 studies on maternal waiting homes in countries across Africa, Asia and Latin America found that catering for women’s dietary and social needs was key to getting them to trade the familiarity of home for the maternal waiting shelters.

Cochrane reviews are widely recognised as one of the strongest types of research reviews in healthcare, sifting through and making sense of all of the scientific evidence on any given topic.

Women surveyed in the studies said that a lack of food, privacy or kitchen facilities were huge barriers to booking into the homes. So too were policies that prohibited family members — especially influential mothers-in-law — from accompanying them. And when food wasn’t provided by homes, researchers found it exacerbated inequality between those who could afford it and those who could not in the wards. And of course, the review found, homes’ successes depended on how well other maternal healthcare services operated around them.

But in Zimbabwe the food packs provided by aid agencies aren’t enough to meet the rising demand.

“If only the quantities [of food new mothers] are receiving could be increased that could go a long way,” says Shepherd Bobo, the acting Tsholotsho district medical officer. “Sometimes those who come [to the maternity waiting rooms] after others have left find the rations depleted… so that’s a major challenge.”

The programme to provide the packs leans heavily on donor funding, which can be fickle. The Japanese government, for instance, was sponsoring this project, but their support ended in March.

So far, he says, the feeding packs have reached nearly 24 000 women in seven districts across Zimbabwe. But in a country where one-third of people are food insecure, that is, in many ways, a drop in the ocean.