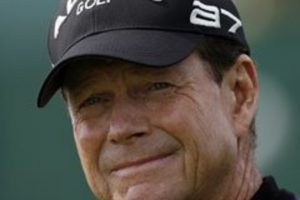 Remembered for his famous ‘waggle’ at address prior to playing a shot, Johnstone was renowned for his short game and topped the European Tour’s short game stat category in 1998, 1999 and 2000.

Since packing away his clubs, Johnstone’s voice can be heard on Sky Sports as he brings a wealth of knowledge and humour to the commentary booth.

Outside of the game, Johnstone, now 63, is a passionate wildlife and bird lover and his Twitter page is a must-follow and is filled with numerous animal – and golf-related posts – with his ‘Saturday soother’ images particularly easy on the eye.

Watson, arguably the greatest links practitioner of the last 100 years, bowed out from competitive golf after last Sunday’s final round of the Senior Open Championship at Royal Lytham & St Annes.

Watson, 69, is an eight-time Major winner with no fewer than five Open Championship victories on his résumé.

Wildly acknowledged as one of golf’s ‘good guys’, Watson is a member of the World Golf Hall of Fame.

On Wednesday Johnstone wrote on social media: A pleasure playing with you over the years, Tom. You were the pro we all wanted to be and thanks for the memories. Jotted a few lines for you. TJ

.@TomWatsonPGA A pleasure playing with you over the years, Tom. You were the pro we all wanted to be and thanks for the memories. Jotted a few lines for you. TJ pic.twitter.com/0oZsrVJHQf