Within days of President Mnangagwa lecturing the West about how ‘the rule of law is sacrosanct’ in Zimbabwe, the police in Harare arrested representatives of rural teachers for trying peacefully to present a petition to the Finance Ministry complaining about their poor pay. 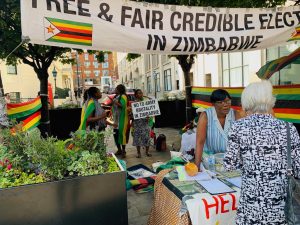 Also arrested was their legal representative Doug Coltart who was thrown on the ground, kicked and handcuffed by riot police. His father David Coltart, a leading opposition figure and former cabinet minister, said ‘only police states detain and assault lawyers for representing their clients’.

President Mnangagwa’s comment – a virtuoso demonstration of hypocrisy – was part of the angry government response to Western condemnation of the suppression of opposition demonstrations over the deteriorating economic situation.

The European Union, as well as representatives from the United Kingdom, France, Germany, Greece, the Netherlands, Sweden and Romania individually, together with the United States, Canada and Australia, called on the Zimbabwean authorities to respect the constitutional right to freedom of assembly and ‘to peacefully demonstrate and petition’.

Meanwhile the popular comedian Gonyeti was abducted, beaten, stripped and made to drink sewage by masked gunmen after making a joke about police brutality.

The writer Petina Gappah has now had enough of the Mnangagwa regime and has resigned from the trade and investment role she was given when ‘the new dispensation’ was announced at the end of 2017.

Dr Gappah, who previously worked for the World Trade Organisation in Geneva, accused the Zanu PF leader’s close lieutenants of pursuing personal wealth accumulation at the expense of genuine reforms to turn around the country’s fortunes.

FOR THE RECORD: 11 signed the register.