HARARE (Reuters) - Zimbabwe police deployed in force on Tuesday to block a street protest for the third time in five days, as the main opposition party said hopes were vanishing that the government might become more tolerant of dissent than the regime it replaced. 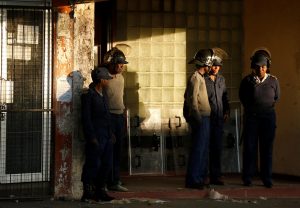 President Emmerson Mnangagwa was elected a year ago on a pro-reform ticket, promising a break with the political repression that characterised Robert Mugabe’s 37-year rule and an economic upturn.

But the economy is mired in its worst crisis in a decade, and security forces have used strong-arm tactics to snuff out three attempts by the main opposition Movement for Democratic Change (MDC) to hold street demonstrations since Friday.

“There is a determined effort by the regime to ensure that there is no more democratic space,” MDC national spokesman Daniel Molokele said.

“They are also deploying a lot of military and police in the streets… It clearly shows that the new government is even worse than that of Robert Mugabe.”

Tuesday’s heavy security deployment was in the central city of Gweru, where police – who had banned the march on Monday night – patrolled on foot and in lorries and cordoned off a university, a local journalist told Reuters.

The MDC said it would challenge the ban in court on Tuesday. The party failed to overturn two previous bans on marches in the capital Harare on Friday – where police rounded up MDC followers and dispersed them with batons and water cannon and tear gas – and in the second city Bulawayo on Monday.

In the days before the planned Harare demonstration, six political activists were abducted from their homes at night and beaten by armed men, rights groups say.

They also say the government has this year levied subversion charges against at least 24 activists and opposition leaders, the highest number in a single year.

The MDC says the protest bans are unconstitutional, while police said they have had evidence the protests would turn violent and did not have enough manpower to monitor them.

Bulawayo saw massive looting and destruction of property in January as protests against a steep rise in the price of fuel turned violent, triggering an army crackdown that killed more than a dozen people.

Those deaths set a question mark against the 76-year-old president’s pledge to end the Mugabe-era repression – which the bans of recent days have further undermined.

“The move to ban demonstrations predicated on a spurious assertion that the opposition is plotting violent regime change, is not sustainable,” said analyst Piers Pigou, Crisis Group’s senior consultant for southern Africa.

“…This is contrary to the precepts of a “new administration” that President Mnangagwa and his team want to sell to the world.

The president, who served as a Mugabe aide over four decades, is also struggling to make good on promises that austerity-driven reforms will revive the economy, as popular anger mounts over triple-digit inflation, rolling power cuts and shortages of U.S. dollars, fuel and bread.

The crisis has revived memories of the hyperinflation of a decade ago that forced Zimbabwe to ditch its currency.