HARARE (Reuters) - Around 9 p.m., a siren pierces the pitch-black night at the Willowvale industrial park in Zimbabwe, signaling that power has been restored after a day-long outage. 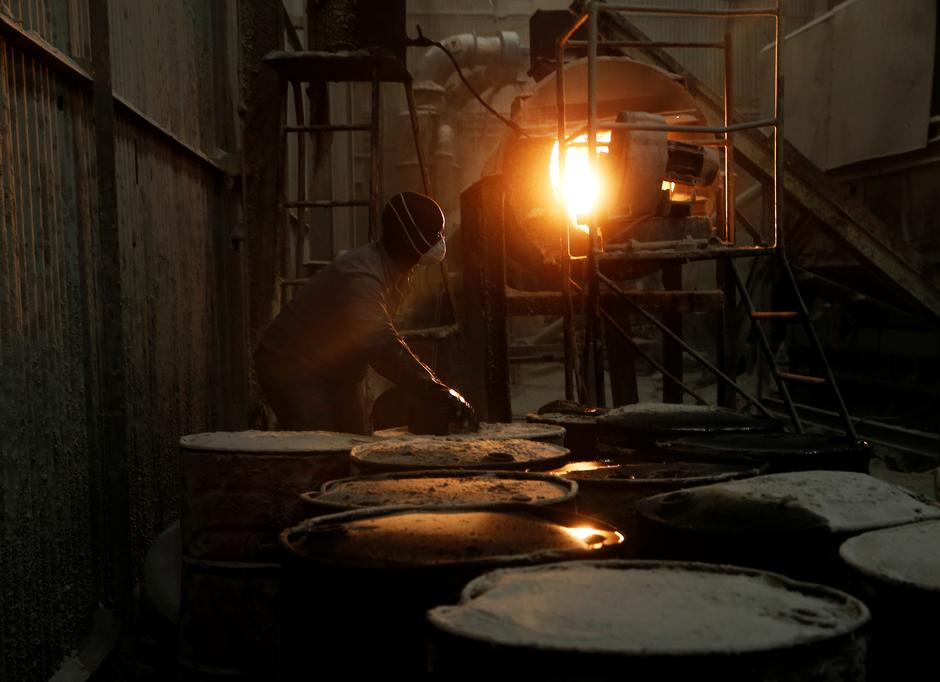 Moments later, eight men in blue overalls walk into a factory and begin shoveling a mound of gypsum into a drying machine to make wall plaster.

Zimbabwe’s worsening power shortages have effectively turned day into night for many businesses, with most work happening well after dark, when lights flicker on for a few hours.

For families, it is the same. Cynthia Chabwino, 32, is a mother of four young children. By the time the lights come on at her modest home in Hatcliffe township, on the outskirts of Harare, they are all fast asleep and she has a few hours to complete the household chores.

Chabwino begins her nocturnal routine by fetching water from an electric-powered borehole for use the next day. By 10 p.m., the line of women and children stretches more than 50 meters (yards).

She then converts a small coffee table in the middle of her living room into an ironing board and starts pressing the children’s uniforms for school the next morning.

“Our lives have become unbearable,” she said. “We are always tired now, but what can we do?”

The southern African country is producing just half of its 1,700 MW peak demand, the result of a prolonged drought that has reduced output at its largest hydro plant and aging coal-fired generators that keep breaking down, according to state-owned power utility ZESA Holdings.

The company has imposed rolling blackouts that last up to 18 hours a day, crippling factories and mines and compounding the country’s worst economic crisis in a decade.

Annual inflation surged to 175.66% in June, eroding earnings and stirring memories of economic chaos under former president Robert Mugabe, when hyperinflation forced the country to abandon its currency in 2009.

The hope that greeted Mugabe’s ousting in 2017 has now turned to despair as his successor Emmerson Mnangagwa struggles to revive the economy and ease shortages of electricity, fuel, medicines and bread.

The government says it plans to import power from its neighbors for now, expand and build new generation plants in the future and encourage off-grid power such as solar for consumers.

The power cuts have cost manufacturers more than $200 million in lost production since June, according to the Confederation of Zimbabwe Industries and Zimbabwe National Chamber of Commerce.

The country’s largest mobile operator Econet Wireless (ECO.ZI) said in July it was struggling to maintain its network.

It said 1,300 base stations, a quarter of its total, now run on diesel generators for over 18 hours a day, burning 2 million liters of fuel every month and adding to its operating costs.

But it is small firms such as Moses Chipurura’s plaster factory – which provide much-needed employment in a country with a jobless rate above 90% – that bear the brunt of the outages.

Like many business owners, Chipurura, 41, has been forced to flip to a night shift at Plaster Centre in the capital, Harare.

Before the power cuts, the plant produced about 20,000 bags of wall plaster a month, he said. Production has now dropped to below 7,000 bags. But he still pays his 24 employees their full salaries, even though they only work six hours some nights.

He has installed a generator to try to keep up with orders. But he can only run it for four hours before it needs to cool down. However, diesel, like electricity, is in short supply.

“Running a plant of this magnitude on diesel definitely means I’m going to be forced to increase my prices,” Chipurura said.

“For now, we are absorbing the costs because the market is already under pressure from inflation. I do not know how long we can do this, though.” he said. “The past couple of months have been a nightmare.”

Zimbabwe’s only immediate hope to ease the electricity crisis lies in imports. The government on Tuesday said it had started importing 300 MW from a regional power pool and was negotiating for an additional 400 MW from South Africa.

In the long term, China’s Sinohydro Corp plans to add another 600 MW at the Hwange thermal station, while Zimbabwe and Zambia will start building a 2,400 MW hydropower plant next year.

But for now, the prospects of an end to the rolling blackouts appear dim.

The relentless power cuts are not only affecting how businesses operate. They are up-ending people’s lives.

John Alfonzo, 42, manages the borehole Chabwino uses in Hatcliffe. He goes to bed around 6:30 p.m. so he can be up when the electricity comes back just before 10 p.m., to begin operating the pump.

“The moment that we receive electricity back, I have to rush and open for these people so that they are able to access water,” he said.

“Because of these power outages, we have since changed our way of life.”