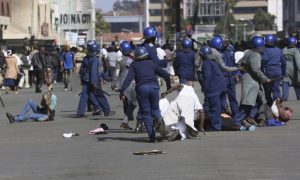 The 2017 military coup resulted in militarization of key state institutions and this further worsened the constitutional crisis in the country.

The situation was worsened by the fact that the ruling party shot for power after ordinary Zimbabweans took to the streets to protest against electoral theft on August 1, 2018. About 6 civilians were shot by the military

The sham 2018 polls resulted in a serious legitimacy crisis that came with adverse effects on economic revival and re-engagement with the international community.

In January 2018, suffering Zimbabweans took to the streets to protest against the continued economic meltdown and again, the army resorted to brutality and this resulted in the death of about 12 civilians while others were raped and tortured.

As discontent continues to grow among suffering Zimbabweans, the military government is getting more and more brutal.

The government has proven beyond reasonable doubt that they stand ready to kill/ shoot for power as evidenced by the army shootings and wave of abductions and arbitrary arrests.

Since the so called new dispensation came into power, a total of 22 political and civic society activists have been charged for treason though the charges are quite baseless and expose the capture of the judiciary.

The government has also intensified surveillance on civic society organizations following baseless and unsubstantiated claims that the organizations are working to effect regime change.

On Thursday, August 29, 2018 a suspicious drone was at the Crisis in Zimbabwe Coalition offices early in the morning.

In light of the threats from the government, we reiterate that it is a constitutional and fundamental right to protest peacefully. We also would like to remind the government that the major driver of the protests is its failure to revive the economy and improve people’s livelihoods.

We further implore the government to respect the right to protest peacefully as enshrined under Section 59 of the country’s constitution.

More importantly, we reiterate our call for an all stakeholders dialogue as a way of unlocking the multi faceted crisis in Zimbabwe.

We envisage a national dialogue that is in the form of a reform process that seeks to safeguard citizens’ interests through restoration of the social contract between citizens and the government.

This national dialogue process must not be restricted to political parties but should rather bring on board a cross section of stakeholders including civic society, labour, religious groups, business among other critical stakeholders.