No amount of “liberation solidarity” is going to rescue a leadership that is imploding. 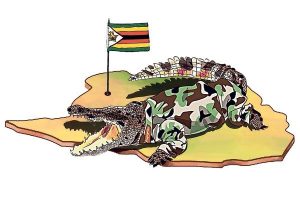 The military has become a very powerful political institution in Zimbabwe. Increasingly the military has been dabbling in the electoral landscape and openly supporting one faction against another in the ruling party. ILLUSTRATION | JOHN NYAGA

Tanzania recently hosted the Southern Africa Development Community (SADC) Summit and, as part of the resolutions, the leaders condemned sanctions against Zimbabwe. They agreed to make October 25, 2019 a “day of political action against sanctions” in solidarity with Zimbabwe.

The ruling Zimbabwe African National Union Patriotic Front (Zanu-PF), celebrated the resolution as a victory. But, as the summit was going on, in Zimbabwe, the opposition had organised national protests, which were brutally stopped by the police backed by the military. While the leaders in Tanzania revived the liberation movement solidarity that historically existed in the pan-African project to liberate Zimbabwe, the people of Zimbabwe themselves were protesting the worsening socio-economic conditions.

While showing solidarity with the political class in Zimbabwe, the citizens have been abandoned. It is likely that the country will face more social unrest.

The leaders meeting in Tanzania did not pay adequate attention to the way Zimbabwe’s crisis has been manufactured by a nationalist elite, who have abandoned the liberation project of transformation and are now focused on an accumulation project, which has killed the country’s economic prospects.

No amount of “liberation solidarity” is going to rescue a leadership that is imploding. The International Monetary Fund has said that Zimbabwe’s economy will experience negative growth. Power generation has almost ground to a halt, as electricity is now only available for a few hours at night. Incomes for the working class have collapsed so badly that the average worker now earns almost $40 a month and unions are threatening strikes.

Inflation has been spiralling out of control and close to five million Zimbabweans have crossed the borders into South Africa, Botswana, Namibia and Mozambique. Others have gone to Australia, Europe and the US. If there were no crisis in printing passports, more citizens would leave.

But this crisis cannot be explained by the noise over sanctions. The economic collapse can be blamed on the way the nationalist-liberation movement in the country has degenerated because of corruption, incompetence and unwillingness to promote economic and political reforms.

After the removal of Robert Mugabe in November 2017, the military has become a very powerful political institution. Just before Mugabe left, the Commander of the Zimbabwe Defence Forces issued a warning that as a “result of squabbling” within the ruling party, “there has been no meaningful development in the country for the past five years” and that the economic impasse had “ushered in more challenges to the Zimbabwean populace.”

Increasingly the military has been dabbling in the electoral landscape in the country and openly supporting one faction against another in the ruling party.

While the involvement of the military in politics can be traced to the early 1980s, it intensified after 2000, when the ruling political class faced a formidable challenge from the Movement for Democratic Change (MDC) then led by the late Morgan Tsvangirai.

In 2008, the military took complete charge of the ruling party machinery and engaged in operations across the country to make sure that Mugabe was retained in the election. The election was so bloody that the opposition leader fled, hundreds of opposition members were brutalised, the Africa Union and SADC refused to endorse the results and the mayhem only ended when a government of national unity was formed.

Since then, the military has continued its march into civilian institutions. Men — and a few women — from the army, especially those associated with the liberation army of the 1970s, are now occupying very powerful positions across the bureaucracy.

Vice-President Kembo Mohadi was in the military in the 1970s; the other vice-president, Constantine Chiwenga was recently the Commander of the Zimbabwe Defences Force (ZDF). The ministers of Agriculture and Foreign Affairs are former army generals. What this means is that while Zimbabwe has constitutional democracy institutions like parliament, judiciary and holds periodic elections, the real political power now lies elsewhere — in what has been called the “junta” or the “system.”

This is a network of very powerful military elites who make decisions that override civilian institutions and the result has been catastrophic on several fronts. Routinely, the military and its resources are deployed against citizens and the election campaign of 2018 was run by a political commissar, who is a former army general.

SANCTIONS AND THE RULING CLASS

The ruling political class has been very quick to point to the sanctions imposed by the US as a stumbling block to economic transformation. There is no doubt that the sanctions have restricted the ability of Zimbabwe to access financial facilities from the likes of the IMF and the World Bank. But the story goes further than this.

Zimbabwe’s growth prospects have been hampered by widespread corruption. When the army generals placed Mugabe under house arrest and then he subsequently resigned, they cited corruption around the president as a cause of political instability in the country. What has since emerged is that for the past four decades in Zimbabwe, the ruling elites have inserted themselves in every corner of the economy – the political class is now the business class.

Officials from the Ministry of Finance recently admitted, in parliament, that the ministry had irregularly disbursed $3 billion. Year in, year out, the Auditor-General has diligently pointed to how state resources have been pillaged and nothing has been done. The Zimbabwe Anti-Corruption Commission is chaired by Loice Matanda-Moyo, the wife of Foreign Affairs minister Sibusiso Moyo.

It was significant that the SADC Summit was held in Tanzania. First, Tanzania’s founding president Mwalimu Julius Nyerere was a pan-Africanist who maintained solidarity with the liberation project in Africa. Second, post-colonial Tanzania has remained politically and socially stable, with leadership changes, and has escaped the scourge of regionalist and ethnic movements that have torn apart most independent African countries. Third, and most importantly, Tanzania, especially the University of Dar es Salaam, provided intellectual space for pan-Africanists, Marxists, nationalists and radical activists of all shades who challenged colonialism and apartheid. So notable was Tanzania in the pan-African solidarity that Dr Walter Rodney made it his home when he was researching, teaching, and wrote How Europe Underdeveloped Africa, which became a seminal text in understanding Africa’s underdeveloped political economy.

But Africa has changed and the nationalist movements have been in power for a while now. The nationalist movement has been in power in Zimbabwe for almost four decades and they have made a mess of things. Unless the regional leaders confront the real problem of militarism in Zimbabwe’s politics, the cycle of repression and protest will continue and more Zimbabweans will continue fleeing poverty. As Nelson Mandela once said, the Zimbabwe crisis is a leadership crisis.

Tinashe L. Chimedza is an associate director of the Institute for Public Affairs in Zimbabwe