This is a message to those who currently hold power in Zimbabwe. I do not really care about how you got into this position but now that you are there we need to ask you what you are going to use that huge power and influence on? 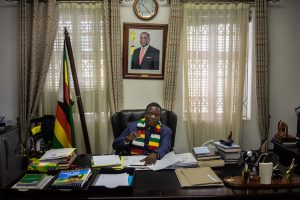 President Emmerson Mnangagwa of Zimbabwe in his office in Harare.CreditCreditZinyange Auntony for The New York Times

We as a Nation have been patient and forgiving, but what you are asking of us now is just too much and we simply cannot tolerate you continuing on the path that you seem to have chosen.

We watched as the ruling elite here stole the diamond bonanza of Marange from us as a Nation. We stood by when you crushed Zapu and in the process murdered tens of thousands and starved the people in Zapu controlled areas. We silently watch as your children flaunt their wealth and privilege in front of us. We are carried to our work in second hand Kombi’s and we pass the massive houses you have built with money stolen from us. We have experienced the failure of one State controlled and managed organisation after another.

We live in Cities and Towns where garbage collection and clean water are a privilege and not a right. We cannot afford a doctor or even get into a medical facility if we have a health crisis, unless we pay money up front. Our roads are either impassable or so potholed it is only time before we will need a 4×4 to get home. Our wages have gone up by perhaps 50 per cent in two years, but prices have risen 5 fold. We go home in the evening and sit in the dark and our diets are now so controlled that we cannot make any more cuts without actually going hungry. Do you really understand how a father feels when he cannot even feed his children?

You fly around in a luxury private jet and when on the ground you move with a convoy that not even the President of the United States enjoys. You are surrounded by hard eyed men who protect you and keep you in isolation from the people who long to be able to talk to you and explain how tough things are on the streets and in the villages in our rural areas. You take what you want just because you can and your colleagues emulate your actions and also abuse their positions and their power over others.

You think I am being too tough? Just ask the ordinary men and women who live under your leadership and government. You will be shocked and dismayed, but we ask will you do anything even if the truth is told to you. We no longer have any faith in our political class or the elite that feasts off the system of patronage that seems to embrace everything that goes on here.

The real tragedy is that there are solutions to every problem that faces us. We have experienced how quickly the problems that we think are insurmountable simply vanish when we do the right things. We know what has to be done and yet we fear that if we did do the right thing that we would lose power and control. The reality is the very opposite – if you did the right things you would be a hero to all of us and would be able to enjoy the spectre of your country going from being a basket case, to success and growth.

With great power comes great responsibility and the one thing we all need to understand is that we all need humility – we do not know everything, we cannot do everything, we need each other and it is our collective wisdom that will carry us to success. No game is a one-man contest; we really do need each other. I am involved in trying to rebuild a failed State asset, this has stood idle for 20 years, staff often unpaid, no leadership and yet in the middle of this mess is an old man who is the caretaker of one building. Still at his job, cheerful and hardworking, never taking a day off and looking after his building as if it were his own – you cannot buy that sort of loyalty. I ask, do we deserve this?

We clearly cannot go on like this, yesterday the fuel queues were kilometres long, I slept in my car for 5 hours to get fuel. We have been experiencing 18 hours of load shedding every day – on at 10 PM and off at 05.00 AM. Bread is unobtainable and when it is its over Z$8 per loaf – 8 times what it was a year ago. Many prices are up by 10 times. It costs over Z$5 to get to town from the suburbs in a Kombi – 50 cents by Bus but they run too infrequently to really make a difference and must be subsidised to run at this rate.

We are two months away from our first plantings on our farm lands and land preparation is not being carried out and funding for the next crop is not in place and even the tobacco crop is contracting. 20 years after the “Fast Track Land Reform” program was launched, we are still importing the majority of our food and most of our farms lie idle and vandalised. Almost half our population is receiving food aid.

But despite all of this stark evidence of failure of Government policy, Zimbabwe remains peaceful and orderly, everyone makes a plan for how to survive and we somehow get by. But I fear this just means that those in power take us for granted and misread the situation as acceptance. Far from it, we as a nation are becoming very angry at this situation and totally frustrated that no one seems to be listening.

November 2017 should have been a clear warning to any future Government, our President for 37 years and the man who gave us our Independence in 1980 and who had been almost worshipped in Africa and beyond as a liberation hero, was overthrown and forced to resign. The response was a national sense of celebration as millions poured onto the streets to thank the Army for their actions. The number who mourned the passing of the Mugabe Government were few and far between. Does this new generation of leaders want to be celebrated in the same way? If not, time is running out.

As I said earlier, solutions to all our problems are available and just need to be adopted and implemented. We have a competent and experienced team in the Ministry of Finance – but their policies and programs are being subverted by a Reserve Bank that is simply out of control and seems to think they are protected. The Ministry of Agriculture is demanding billions to feed a corrupt system that includes the GMB which is rotten from the top to the bottom and can no longer do what it was created to do – it is a liability.

We steadfastly fail to recognise that we have to compensate the old farmers and then give our new farmers security of tenure with bankable leases. Just that one quick measure – agreed and adopted in a day, would create billions of dollars in assets that our people could pledge for loans and finance agriculture on a sustainable basis.

Corruption drags us down and drains billions from our economy – most of it going abroad or being used in lavish consumption. There is evidence that everyone is involved in this feeding frenzy, it must stop. Let’s draw a line in the sand and say that if those who do not then stop their corruption in any form, will face immediate and severe punishment.

We need a market driven economy where prices are set by the market, including the price of foreign exchange and all foreign earnings should go through a proper market for such transactions. If we adopted such policies and strategies, we would discover we are in fact much richer than we thought and can at last afford to live decently and with dignity in the land of our birth.