HARARE (Reuters) - The United Nations on Tuesday increased its aid appeal for Zimbabwe to $331.5 million to help it recover from drought that has driven millions to the brink of starvation as well as a cyclone that hit eastern regions earlier this year. 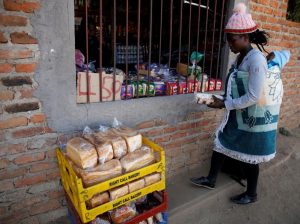 A woman buys bread at a shop in Chitungwiza, Zimbabwe, July 16, 2019. REUTERS/Philimon Bulawayo

The El Nino-induced drought cut the maize harvest by half and is responsible for low water levels at the biggest hydro plant Kariba that has reduced power generation and triggered rolling power cuts.

The drought comes with Zimbabweans enduring the worst economic crisis in a decade – prices of staples such as sugar, cooking oil and rice have more than doubled since June, jacking up inflation to 175.66%.

David Beasley, executive director of the U.N. World Food Programme, said 2.3 million people in rural Zimbabwe need emergency food aid now and the figure would increase to 5.5 million during the lean season up to March next year.

The government estimates another 2.2 million people in urban areas also require food aid, bringing the total to 7.7 million, more than half of the southern African nation’s population.

The $331.5 million would be used for food aid, provision of water and sanitation and cash handouts to stricken families.

“We are talking about people who truly are marching toward starvation if we are not here to help them,” Beasley told diplomats, aid agencies and government officials at the launch of Zimbabwe’s humanitarian appeal to international donors.

“We are facing a drought unlike any that we have seen in a long time. We don’t have the luxury of fiddling while Rome burns.”

The United Nations had previously appealed for $294 million but as the impact of the drought has spread, it needed more funding.

Finance Minister Mthuli Ncube told the same meeting that the government was surprised by the impact of the drought on power generation.

Another government official told reporters earlier on Tuesday that Zimbabwe would import 400 MW of electricity from neighboring South Africa’s Eskom after agreeing to make weekly payments of $890,000 to clear its debt.

This was after a treasury official said on Monday Zimbabwe would ramp up electricity imports over the next few weeks, potentially easing rolling power cuts, after agreeing to clear its debt to a regional power utility.

“The impact of weather goes beyond the vulnerable, it is affecting production in the manufacturing sector, agriculture and everywhere, and this is an impact again that was not anticipated,” Ncube said.

The hope and euphoria that greeted long-time leader Robert Mugabe’s departure after a coup in 2017 has gradually turned to despair as Mnangagwa has failed to revive the economy or usher in meaningful political reforms.

Amid rising discontent over the state of the economy, the main opposition party said it was planning street demonstrations next week to protest against the government’s handling of the economy.