In the Shona language, Nyamavhuvhu (August) signals the end of winter. The strong winds carry away the frost as they usher in the warmth of summer. With the silent strength of a new season, public discontent towards President Emmerson Mnangagwa’s failing socio-economic policies sweeps across Zimbabwe, manifesting itself through mounting displeasure and the growing threat of civil unrest. 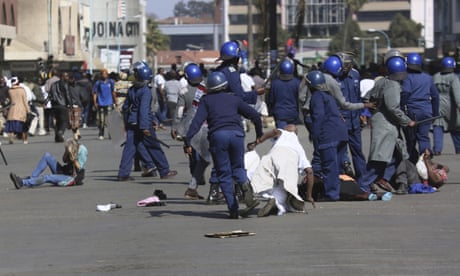 On the streets of the capital, Harare, a middle-aged woman lies unconscious on the asphalt. An uncanny silence hangs in the air, punctuated only by the sound of water cannons patrolling the street and a sea of riot police conversing in hushed tones with each other. The blue-helmeted police, a signature of the Robert Mugabe era, march in straight lines through the central business district. Businesses are closed. Thick clouds of off-white teargas fill the sky. An old, grey-haired man who is left behind by the fleeing crowd is kicked in the ribs by two police officers and dragged by his side. A young man who tries to assist the stricken woman is arrested and bundled into a police truck. Elsewhere, Red Cross volunteers attend to an old woman who has suffered injuries to her head after being beaten.

The protesters had gathered on Friday to express their anger at Mnangagwa’s rule. People are increasingly dissatisfied with the impact of failing economic policies, a broken public health system, the soaring prices of basic goods and the collapse of public services. They had been waiting in preparation for a protest march organised by the Movement for Democratic Change at Africa Unity Square, a garden in the heart of Harare. In this same garden, just a few years ago, Itai Dzamara stood as a lone protester calling for Mugabe to go.

The protesters could not access the square because the police had cordoned it off. Instead, they congregated on a main road adjacent to the square, patiently awaiting the outcome of a court challenge mounted early that morning. The court challenge sought to overturn a police ban that had been instated using the notoriously repressive Public Order and Security Act at the 11th hour, the night before the planned demonstration.

Protesters chanted songs similar to those sung during the liberation struggle. They sat in the middle of the road, in an act of peaceful protest. As they sat, a wave of baton-wielding riot police charged at them in an attempt to disperse the growing crowd. Many, including older people and women, who could not run away as fast as the more youthful protesters, were badly beaten.

The violent police clampdown is just the latest action in a tale of unbroken state repression that continues from Mugabe’s era. In the aftermath of the July 2018 election, the military killed at least six civilians as it drove army tankers through the streets of Harare to quell a protest. Similarly, in January this year, the army fired live rounds at civilians in the wake of a protest against the rising cost of living. At least 12 civilians lost their lives. The perpetrators have yet to be indicted or held accountable for the loss of life, despite a theatrical commission of inquiry launched by Mnangagwa in a bid to repair his already crumbling international image.

In addition to thwarting the freedom to protest, the repression by Mnangagwa’s government has been characterised by the partisan use of security services, tampering with judicial independence, the surveillance and intimidation of activists, sham trials of human-rights defenders, impunity for human-rights-violating security forces – and targeted beatings and abductions of human-rights activists and members of the opposition.

Mnangagwa’s promise of change and reform, much lauded by the UK and Europe at the time of Mugabe’s ousting, has proven to be a mirage. It was argued by the UK and some in Europe that Zimbabwe needed a “strong man”, a Paul Kagame-type figure, to drive economic reforms. However, on this front too, Mnangagwa has failed amid several negative economic indicators: official statistics claim that annual inflation surged to 175.7% in June, although economists project that the real inflation rate is much higher than this. The government has since suspended the official publication of inflation statistics. There have been shortages of food and fuel. There has also been a return to acute, daily power cuts, which often last for 18 hours, with power returning in the dead of night.

The government’s mantra that “Zimbabwe is open for business” has proven to be a hollow epithet, as foreign direct investment remains extremely low and local businesses continue to close shop in the face of a confidence deficit. Corruption remains rampant with little commitment to deal with the perpetrators and recover the looted funds. 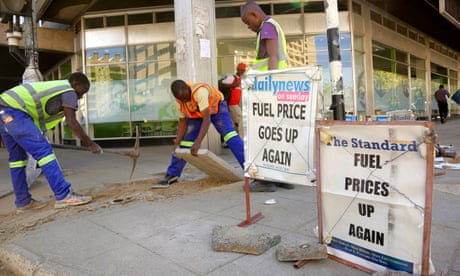 Mnangagwa has failed at the most basic political reform. The mask has fallen away leaving in its stead a man more brutal and devoid of character than his predecessor. In the wake of his stewardship lies a country where individuals cannot afford a decent life and are punished for trying to register their growing discontent. It is time for the UK and Europe, who backed Mnangagwa, to stand with democratic forces and innocent, brutalised citizens – not a corrupt authoritarian regime incapable of reforming politically and economically.

Only then can the winds of real change sweep across Zimbabwe.

• Fadzayi Mahere is a Zimbabwean lawyer and politician