HARARE (Reuters) - A Zimbabwean court freed a senior opposition official on bail on Monday, after charging him with failing to stop an anti-government protest that authorities had banned. 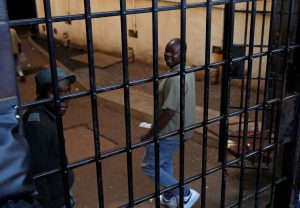 Amos Chibaya, national organizing secretary for the opposition Movement for Democratic Change (MDC), was an organizer of a street demonstration the party convened in Harare on Aug. 16 to launch a national protest movement.

The MDC accuses President Emmerson Mnangagwa’s government of political repression and mismanaging an economy that is mired in its worst crisis in a decade.

Police banned the Harare demonstration as well as similar protests the MDC planned to hold in other cities. Some opposition supporters still turned up in Harare and were dispersed by police using batons, tear gas and water cannon.

Chibaya was released on bail of 400 Zimbabwe dollars (about $39) on condition that he not interfere with witnesses, his lawyer, Obey Shava, told Reuters. He had already surrendered his passport.

Chibaya is due back in court on Sept. 12, and again on Oct. 4 to face a separate charge of subversion over a January protest against a steep fuel price hike.

Fuel prices rose 10 percent on Monday, the Zimbabwe Energy Regulatory Authority said. They have increased more than 600% since the start of the year.