HARARE (Reuters) - Zimbabwe’s government offered to raise public sector wages by 76% on Friday, an umbrella group for public sector unions said, in a bid to tackle widespread anger over the state of the economy. 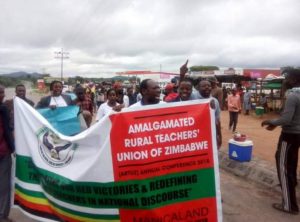 The authorities have been cracking down on dissent in the country and preventing opposition-led demonstrations.

Police earlier in the day arrested 10 union officials as they tried to lobby the finance minister over low pay for teachers, witnesses said.

They bundled officials from the Amalgamated Rural Teachers Union of Zimbabwe into a truck outside the finance ministry. They also arrested the group’s lawyer, Douglas Coltart, and a journalist with online news outlet newzimbabwe.com who was filming the arrest, the witnesses said.

The journalist was later released without charge.

The union had been trying to present a petition to finance minister Mthuli Ncube over teachers’ salaries, which average around 500 Zimbabwe dollars ($50) a month.

The umbrella group for unions, known as the APEX Council, said the government’s new, higher pay offer would mean the lowest paid civil servants earned 1,023 Zimbabwe dollars per month compared with their demand of 4,750 dollars.

It said that it would consult its members and that talks with the government would resume on Tuesday.

The economy is mired in its worst crisis in a decade, and security forces have in the past week snuffed out five attempts by the main opposition Movement for Democratic Change (MDC) to hold street demonstrations, dashing hopes that the government might live up to promises of becoming more tolerant of dissent than the one it replaced.

The party’s national organizing secretary Amos Chibaya on Friday appeared before Harare magistrates charged with failing to stop a demonstration the MDC tried to hold in the capital a week ago. He denies the charge.

The protest was planned as the launch event for a nationwide protest movement against the government of President Emmerson Mnangagwa.

Mnangagwa was elected a year ago on a promise of breaking with the strong-arm tactics that characterized Robert Mugabe’s 37-year rule, and engineering an economic upturn.

The MDC accuses Mnangagwa of political repression and blames his government for mismanaging the economy, triggering triple-digit inflation and widespread shortages of fuel, power and bread.

It said in a statement Chibaya’s detention “is testimony that the regime is undertaking a brutal program of persecution by prosecution” of MDC members.

If convicted he faces a one-year jail term or a fine.

State prosecutors opposed his application for bail, saying he would likely commit the same crime. The magistrate said she would make a bail ruling on Monday, which means Chibaya will spent the weekend in detention.

Chibaya is also facing trial on subversion charges linked to violent protests in January that prompted an army crackdown that led to the deaths of more than a dozen people.