HARARE (Reuters) - Zimbabwe’s economy will shrink this year due to a drought, foreign currency shortages and severe power cuts, its finance minister said, as he announced a threefold hike in electricity tariffs that will fuel already crippling inflation. 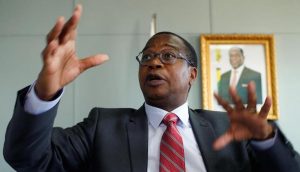 Prices of basic goods and services have more than doubled since June, when the government renamed the RTGS currency as the Zimbabwe dollar, which has been sliding in value amid widespread shortages, including power, fuel, U.S. dollars and bread.

That has stirred memories among an increasingly impoverished population of economic chaos a decade ago, when rampant money-printing fueled hyperinflation and forced the country to abandon its currency.

“The revised 2019 GDP growth is expected to be negative,” minister Mthuli Ncube told parliament in his mid-year budget review, without providing a figure. In November he had forecast growth of 3.1% growth.

He also said average domestic electricity tariffs would rise to 3 U.S. cents per kilowatt/hour from 1 cent with immediate effect as the government seeks to raise more funds for power generation.

The businesses tariff would average 5 cents while mines would pay up to 9.86 cents depending with the sector, he said.

“These are short term measures we are taking to ensure better supply of power with immediate effect,” Ncube said.

Zimbabwe has been suffering acute power shortages since May, as a result of a prolonged drought that has reduced output at its largest hydro plant and ageing coal-fired generators that keep breaking down.

Ncube also said Zimbabwe would defer publication of year-on-year inflation until February 2020 because adoption of a new currency impacted the base for calculating the consumer price index. Only monthly data would be published.

The hope and euphoria that greeted long-time leader Robert Mugabe’s departure after a coup in 2017 has gradually turned to despair as his successor as president, President Emmerson Mnangagwa has failed to revive the economy or usher in meaningful political reforms.

The main opposition boycotted Ncube’s presentation attended by Mnangagwa, whom they do not recognize after disputed elections last year.

Workers’ incomes have been eroded by the resurgent inflation and many now struggle to buy basic goods like sugar, flour and cooking oil.

In a bid to give some relief to workers, Ncube raised the non-taxable income threshold from 350 Zimbabwe dollars ($76) to 700 Zimbabwe dollars. He said the government would import grain to feed 5.5 million people in need of food.

Foreign investors could now own majority stakes in platinum and diamond sectors, Ncube said, adding that indigenisation and empowerment law that limited foreign ownership would be repealed and replaced by new legislation.

But Zimbabwe’s economy is in meltdown, fuelling popular anger, and there are concerns of a resurgence of the violence that spilled onto the streets in January, when a sharp fuel price hike sparked protests and an army clampdown in which more than a dozen people died.

Yet, analysts say increases in the price of fuel and electricity tariffs are needed to remove subsidies and put government’s finances on a strong footing.

Ncube said the government ran a budget surplus up to June, first time in years, stopped runaway money-printing and ended offshore borrowing. It has not used a central bank overdraft under an IMF staff monitoring program, actions that are supposed to revive the economy.

But probably the biggest driver of inflation expectations is the lack of confidence many Zimbabweans have in the country’s new currency. Before its reintroduction, it was named the RTGS dollar and had been artificially pegged to the U.S. dollar, leading to a huge discrepancy between its official and black market rate.

Many citizens also doubt their leaders can deliver the changes they seek because they are mainly the same people who propped up Mugabe for decades.